Derick Brassard a crucial cog in the Rangers playoff machine 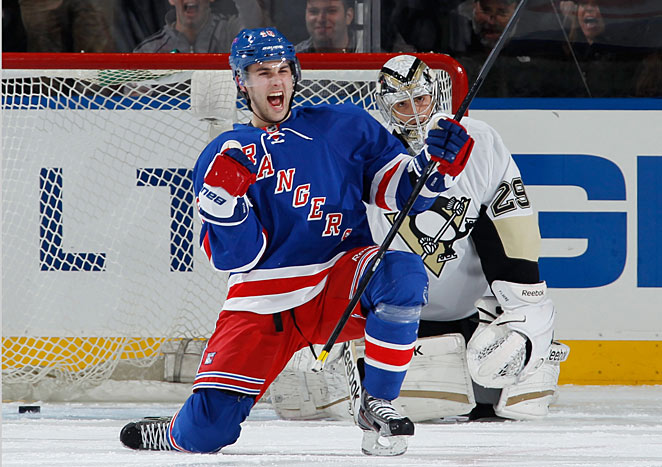 Whether it was with the Columbus Blue Jackets or the New York Rangers, Derick Brassard has often left the impression that the best is yet to come. One thing Brassard has always done however, is respond positively to criticism or droughts, and has developed an encouraging tendency to turn up in the big games. It all bodes well then for the rest of the playoffs, but also with regard to his future as a Ranger.

Brassard is arguably one of the most naturally gifted players on a Rangers team that has a handful of All Star calibre players and potential Hall of Fame candidates. It is perhaps Brassard’s presence – and playmaking ability – that makes the departure of Brad Richards in the summer so likely. Also, it is Brassard that makes recruiting an eventual Richards replacement an option rather than a necessity.

With 45 points in 81 games during the regular season, Brassard flashed his undoubted ability in a third line role where he has developed great chemistry with Mats Zuccarello and Benoit Pouliot. It is now fair to assume, with great responsibility comes greater production? If Brassard can flirt with 50 points in a 15 minute/game role, can he be a 60 point player with 18+ minutes? He certainly has the talent.

With two game winning tallies already this postseason, Brassard has made himself irreplaceable. Brassard has played 28 postseason games as a Ranger and has an impressive 20 points to show from it. His importance this offseason is only emphasised by Derek Stepan’s injury and the inconsistent form of Rick Nash and other key offensive players on the roster.

Heading into Game Five against the Canadiens, maybe no player is more important to the Rangers right now. The Rangers can almost assume Henrik Lundqvist being a brick wall in net, while Ryan McDonagh’s form has returned after a cagey start. Martin St Louis has also found his groove, but with a hole at center and injuries mounting, the Rangers need Brassard to contribute and help close out the series.

With the LA Kings looking in dominant form and displaying a perhaps unrivaled level of depth up front, assuming the Rangers and Kings advance, it is players such as Brassard and Chris Kreider that can keep the Rangers in a series with the Kings. The Rangers can be rest assured that Nash, St Louis and McDonagh will get close attention if the two teams square off in the Finals. It is then players such as Zuccarello, Kreider and Brassard are needed. Brassard’s ability to raise his game in the playoffs can no longer be disputed, it will be well beyond dispute if he helps the Rangers to a long sought after Cup win.