After dispatching the Penguins and Bruins, respectively, the Rangers and Montreal Canadiens will meet in the Eastern Conference Finals. Each team will be looking for their first Stanley Cup championship since the early 90’s, and will face one another for the first time since 1996. The two teams are actually relatively similar. They rely on speed, depth, balance and will lean heavily on their world-class goaltenders.

Montreal’s, as well as know, is Carey Price. Price has had quite the season thus far, leading a Canadiens squad with relatively low expectations to a 100 point season, a Conference Finals birth, and an Olympic Gold Medal in Sochi. He is going to be a formidable task for the Blueshirts if they plan to chase the ultimate prize. Let’s see how his game stacks up… 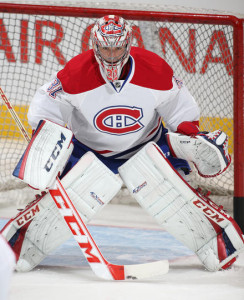 Price’s stance has actually evolved significantly over the course of his NHL career. When he first broke into the show as a blue chip prospect, his stance was far more upright. His chest pushed forward and his weight in the back in his hips. This past few seasons, culminating this year, he has pushed his balance point further forward and adopted a more traditional crouch. Think of a less aggressive Jonathan Quick.

His skate setup is slightly wider than average and is glove actually sits a little lower than you would expect for a guy with his glove hand skill, but he creates a compact, efficient base from which to work. Price doesn’t leave many holes when shooting directly at him.

Short of the aforementioned Quick, no NHL goaltender has the elite mobility of Carey Price. His balance is unrivaled and has seemed to take his efficiency to another level this season. He makes even the most difficult saves look routine. He uses well-executed pushes to butterfly slide around the netmouth with ease, and has little difficulty with second and third chances. His backside recoveries are smooth and accurate, and has an uncanny ability to get large portions of his frame in front of high-difficulty chances.

Price’s overall depth is about average. He challenges the shooter opportunistically and takes advantage of his 6’3” frame. His actual positioning is world class, you rarely catch him legitimately off his angle. He has the lateral mobility to rival Jonathan Quick’s range, but is far more responsible with it. You won’t find him straying out to ridiculous depths chasing shooters around. His discipline makes him even more frustrating.

A converted Vaughn goalie, Price was lured by Reebok/CCM to be the poster-boy for the new EFP Line from CCM, which debuted last season. Rumor has it that he had the set extensively modified to meet his Vaughn-like tendencies, and that he is using a set very different to the ones found on the shelves in your local pro-shop.

This has allowed Price to take advantage of the branding and marketing opportunities whilst not sacrificing the soft blocking surface he benefitted from in his Vaughn pads. As the NBC broadcasters unwittingly pointed out, Price has impeccable rebound control and likes to keep pucks close to him after the shot to either dispense to his defenders or to cover and freeze. Generally speaking, the CCM line he wears throws rebounds out much farther than Price tends to, reinforcing the notion that he has a significantly altered set-up.

Like just about anything else in Price’s game, he is a solid puck handler. Like most, however, he isn’t a Mike Smith or a Marty Brodeur with homerun outlet passes and stretch plays. He handles the biscuit competently and distributes it effectively. He has the power and accuracy to lead teammates catching a bad change, or ice the puck on the PK, but its not a major part of his game.

Unfortunately, there are almost none. Price picked this year to put all of his considerable talents together and has gone on runs where he is almost unbeatable. Just look at Sochi. He let in three goals the entire tournament. Just let that sink in for a minute. Sure, he had one of the best defensive corps ever assembled, but that’s insanity. He has the best glove hand in the NHL, and makes big-time saves look easy.

The Rangers are going to have to beat him in ugly ways. Bodies to the net, deflections, and rebounds (if they can find any). Not that Montreal has a weak blue line (they don’t), but it’s inferior to Boston’s backline and they will need to exploit that to find Price in vulnerable situations if they want to score on a regular basis. It’s not going to be easy.

Of all the goaltenders the Rangers could draw from here to the Stanley Cup Finals, Price probably scares me the most. After the season, Olympics and playoffs he has put together, he is a legitimate challenger to Quick and Lundqvist for the best goaltender in the NHL. He is calm, efficient and riding an elite run of form at the moment. It is imperative that the Rangers do whatever they can to make his life difficult in front of the net.

Early in Price’s career, he had some maturity issues and could come unraveled if the other team got in his face too much. I doubt those issues are prevalent at this stage of his career, but its the best strategy we got at the moment. Although, it’s not like the Habs have a much easier calculus with Hank at the other end. This series could end up a goaltending matchup for the ages.