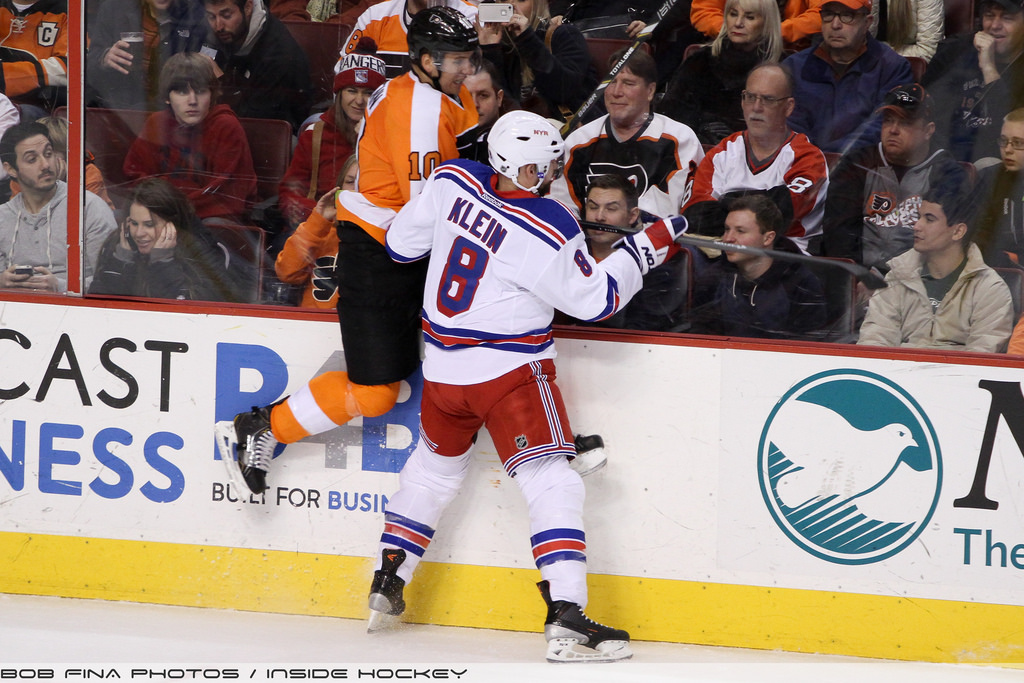 If a trade was judged purely on previous production there would have been a lot more complaints the day the Rangers traded away Michael Del Zotto for Kevin Klein. Luckily, the Ranger fan base is (on the whole) more informed than that.

Looking back at Glen Sather’s acquisition of Kevin Klein, it would be easy to assume Sather gave up on Del Zotto (which was true to an extent) but a more appropriate way of looking at it would be how Sather was able to BETTER balance his defense when he brought Klein on board.

While Klein’s 6 points, +4 rating and 36 hits are not jaw dropping numbers the good ol’ fashioned eye test helps to review his game. Klein has generally impressed with his decision making and ability to make a solid defensive play consistently. His positioning has been consistently good and his ability under pressure has been strong. Klein has no problem taking a hit to make a play and has been a solid addition for the Rangers. No longer do Ranger fans hold their collective breath like they did when Del Zotto wandered around his own zone.

With Ryan McDonagh’s offensive emergence, Dan Girardi and Marc Staal receiving powerplay time and the club’s determination to develop John Moore, Del Zotto simply wasn’t needed in New York anymore, nor were his inconsistencies tolerated any longer. Klein was brought to New York because he addressed a need, whereas Del Zotto could no longer do so.

While Klein has become a solid (albeit relatively expensive) depth option for the Rangers Del Zotto on the other hand is facing a critical juncture in his career as he has yet to reignite his game with the Predators. While Del Zotto’s defensive play has always been a concern, he no longer makes up for his issues with offensive production like when he first made the Rangers as a teenager.

Given the players the Predators can turn to for blueline offense (Shea Weber, Seth Jones, Roman Josi, Ryan Ellis) a budget conscious club like Nashville will surely cut the cord and let Del Zotto go this summer. Del Zotto has just four points in limited action since March 1st and while he remains a talented player who will likely get picked up by a club over the summer, the Rangers clearly won the trade at this stage. There’s only one club that have gotten satisfactory production from their acquisition and that’s the Rangers.