Why the Rangers need to address the center position this summer 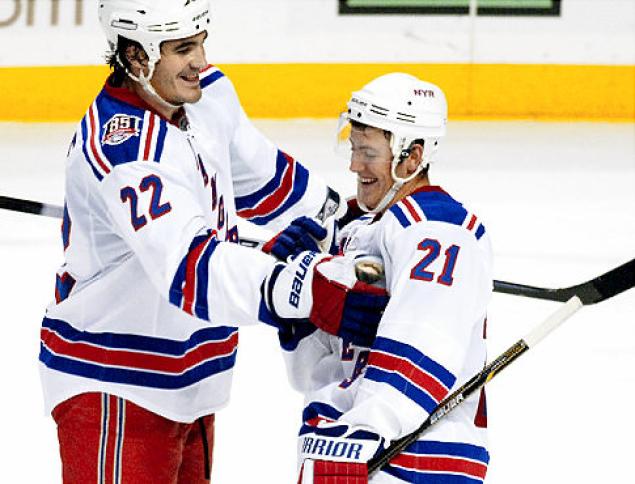 Derek Stepan is awful at face-offs. It needs addressing.

Not a single team currently ranked lower than the Rangers in face-off percentage this year will be in the playoffs. The last four Stanley Cup Champions (Chicago (twice), LA and Boston) rank 5th, 3rd and 8th respectively in face-off success. All three of the Rangers centers relied on for their offense – Derick Brassard, Derek Stepan and Brad Richards (so, not Dom Moore and Brian Boyle) – have less than a 50% success rate, with Stepan winning a paltry 45.2% of his face offs. Can you see the point we’re trying to make?

When Brad Richards leaves the Rangers this summer, the team must ensure his replacement(s) count face-off ability among their skill sets. Face-off weakness is also one why reason why Derick Brassard being retained isn’t a guarantee. Aside from resolving Marc Staal’s contract situation this summer, perhaps the biggest focus for the Rangers needs to be acquiring proven face-off centermen.

When a team wants to play puck possession hockey, be able to control the puck and generate offense they are immediately behind the eight ball when they can’t win draws. The Rangers powerplay has been frustrating and a large part of it’s lack of consistent success is because of face-off ineptitude. Too often the Rangers fail to set up and lose critical time off the clock because the puck is easily cleared by the opposition.

Of course, the impact of draw success goes beyond special teams success. The Rangers are not a particularly big or physical club and if they want to win a Cup (or Cups), for the foreseeable future they will need to go through the likes of Boston, LA and St Louis. All three clubs are big physical teams that grind you down; they come at you in waves and impose their size on you.

If you win the draws and control the puck then there are only so many times those kind of teams can turn you around, get the puck in deep and wear you down in the corners and along the boards. It’s a simplistic theory but a valid one. Win the puck, control the game. The Rangers – smaller than many of their intended rivals – simply must get better in the circles.

Face-off success is critical. It’s why the Rangers need to make a play for one of the Colorado Avalanche centers Paul Statsny and Ryan O’Reilly in the summer assuming either becomes available. With 53.9 and 52.2% success rates respectively either center would help the team not just generate offense but control the puck and tilt the ice in the Rangers favour. Both may turn out to be overpriced, a health risk and/or not generate the offense their contracts may demand but if the Rangers have more offensive zone time it will lead to greater success. If the Rangers want to win Stanley Cups its time they addressed their long standing face-off weakness.