The Rangers came into Edmonton last night on the heels of an embarrassing loss in Calgary to a bad team. Edmonton, another bad team, paid the price of facing the Rangers after a bad game, and got absolutely dominated en route to a 5-0 shutout. Rick Nash and Mats Zuccarello had a pair of goals a piece, Derek Stepan had three assists, and Cam Talbot made 26 saves for his third shutout of the season/career.

The Rangers controlled play from start to finish in this game, using their forecheck to force a shaky Edmonton defense into multiple turnovers that led to goals. Ben Scrivens didn’t have his best game, but the Swiss-cheese Oilers defense didn’t really help him out that much either. This was the perfect rebound game for a New York team headed to the playoffs. 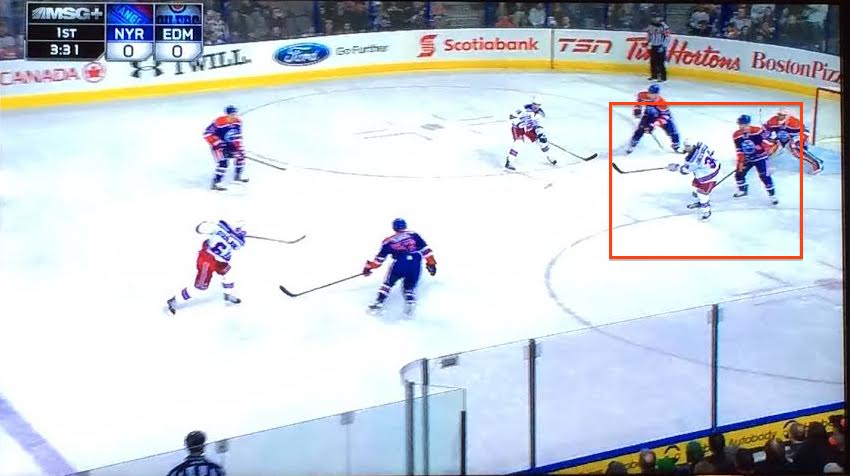 Anton Stralman forced David Perron into a bad turnover in the defensive zone, as Perron threw the puck cross ice that none of the three Oilers on the other side could collect. Benoit Pouliot picked up the puck after it caromed off the boards, skated around a lazy stick check from Perron, and fed the biscuit back to Stralman at the point. Stralman let loose a solid wrist shot that Zuccarello deflected past Scrivens. There was no real issue with the Oilers’ defensive setup on the goal, as they were using net side positioning on both Zuccarello and Derick Brassard in front.

Brassard simply tried a cross ice pass that deflected off Martin Marincin and past Scrivvens. No picture on this one, it was a bit of a fluke goal. 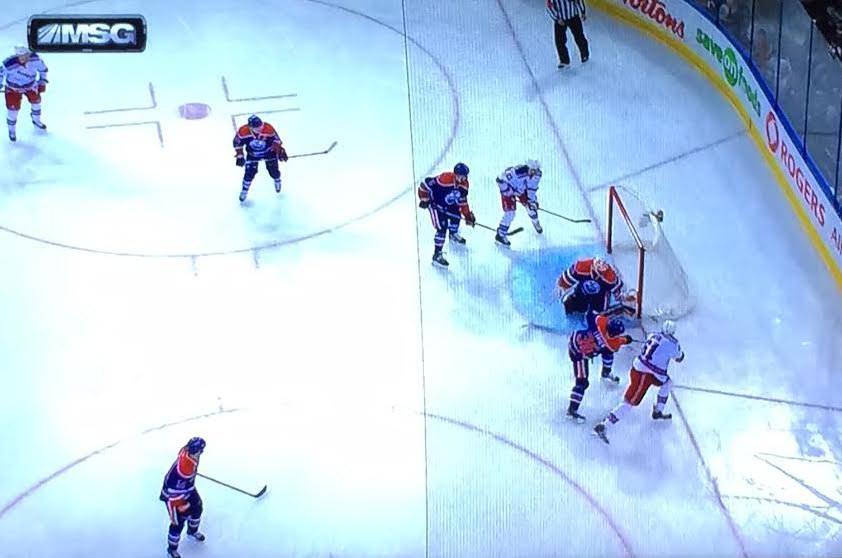 Stralman, who had a very good game, made a good defensive play in the last seconds of a penalty kill to deflect away a centering pass. Stepan picked up the puck and hit Dan Carcillo out of the box, but that didn’t lead to a shot on net. Carcillo held the zone long enough for help to arrive, and he got the puck back to Stepan at the top of his off-wing circle. Stepan tried to hit Nash back door, but the pass didn’t connect. Nash was able to bank the loose puck off Scrivens from behind the net. Scrivens probably wants this one back. 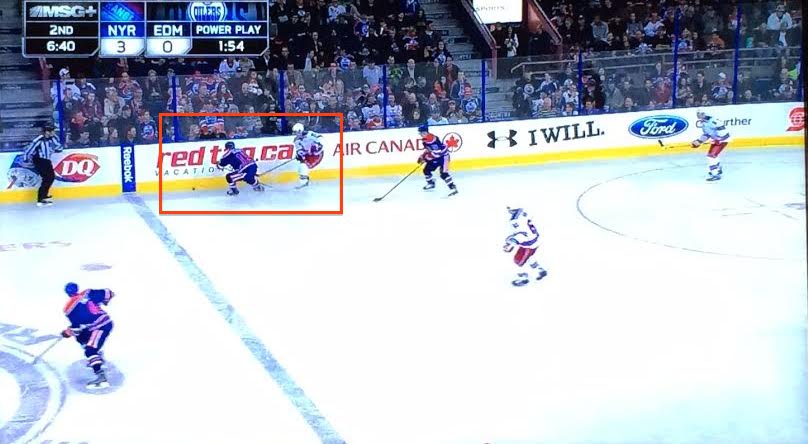 While shorthanded, Stepan was able to chip a loose puck –from a Taylor Hall shot that didn’t hit the net– past Justin Schultz at the point, creating a 2-on-1 with Nash. Stepan fed Nash in the offensive zone, who beat Scrivens short side. 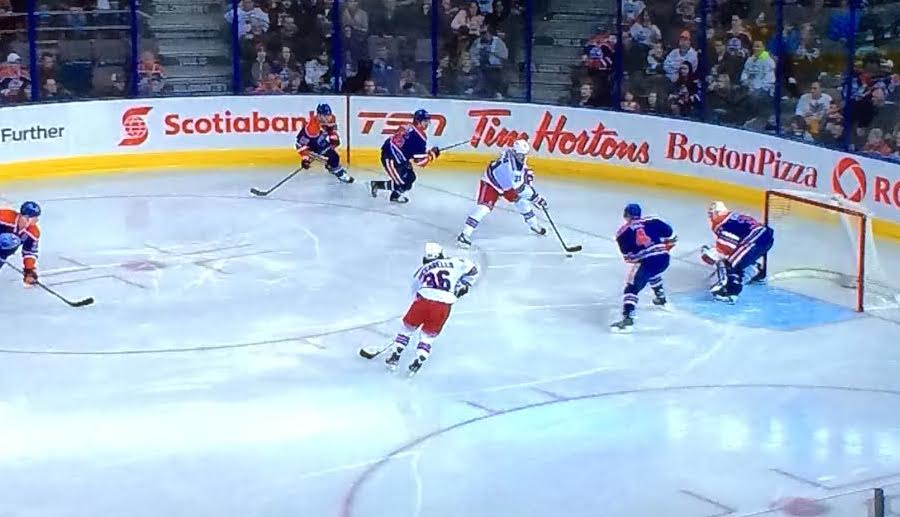 Again shorthanded, the forecheck from Stepan forced Philip Larsen into a bas pass that Marc Staal picked off at the Rangers blue line. Staal fed Stepan for a 2-on-1 with Zuccarello that didn’t materialize, but Stepan was able to collect the loose puck for a mini 2-on-1 low. Hall can’t block the Stepan pass, and Zucc had an easy goal.

This one is pretty straight forward: The Rangers dominated from start to finish. The dashed lines represent non-even strength play. It’s like the Oilers didn’t even realize the game started until halfway through the first period, and gave up right after the first goal was scored.

Again, what you expect from this kind of game.

With the win, the Rangers put themselves back in second place in the Metropolitan Division, two points ahead of the Flyers and six points ahead of the Blue Jackets. Both teams have a pair of games in hand on the Rangers, but the Rangers hold the tiebreakers on both. The magic number to clinch a playoff spot is now down to ten (any combination of ten points earned by the Rangers or lost by Detroit/Columbus earns them a spot).