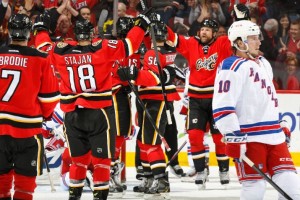 The Rangers saw their five game winning streak snapped in addition to having their lead on the Flyers for 2nd place in the Metropolitan Division trimmed in a bitterly disappointing loss to the Flames in Calgary tonight, 4-3.  This one saw Martin St. Louis kick in his would-be first Rangers goal, Henrik Lundqvist surrender a super soft game winner, and Kari Ramo make some huge saves before all was said and done.  It wasn’t all bad for the Blueshirts, however.  They created tons of chances, and the 4th line again looked fantastic.  It’s just tough to swallow a loss against a team like the Flames.  Onto the goals…

After some nice work on the forecheck, Derek Dorsett pursued the puck into the zone and took and ill advised penalty behind the play.  As the penalty wore down, McDonagh and Derek Stepan found themselves both collapsing as the Flames entered the zone.  This gave Curtis Glencross the space to drift into the high left slot and blasted a shot over Hank’s left shoulder.  Although the light went on and both teams reacted as if the puck had gone in, it had actually hit the post.  On the ensuing scrum in front, Joe Colborne banged in a rebound for the early lead.

This goal started with Ryan McDonagh making a risky pinch and setting the Flames off in transition.  The Mike Cammalleri hit a trailing Mark Giordano at the top of the circles.  The entire Rangers’ defense seemed to back in simultaneously, which gave the Flames’ captain all the time and space he needed to snap a well-placed shot off the post to the glove side.

The 4th line strikes again.  Dominic Moore and Derek Dorsett combined to get the puck deep, and Brian Boyle crashed the net.  Dorsett and Moore managed to draw all the Calgary defenders to them, while Boyle was uncontested in front.  Once the pass came through, Boyle deflected the puck off the post, but was able to easily tap in his second attempt for the goal.

The Rangers got the puck deep and went to work around the perimeter.  The Flames got caught running around in their zone, and Diaz was given a relatively open shot from the point.  The puck deflected twice on its way to the net, finally glancing off Tyler Wotherspoon and bouncing through Kari Ramo to knot the score.

The Rangers would take the lead just moments later.  Benoit Pouliot forced a turnover in the neutral zone, springing Carl Hagelin and Brad Richards on a two-on-one.  I originally thought Carl’s decision to pass was a little suspect, but Richards had more room than I thought and wristed a beautiful shot over Ramo’s glove hand.  The Rangers scored their three goals 3:27 apart.

The Rangers didn’t exactly lock it down defensively after they completed their comeback.  Shortly thereafter, the game took on a distinct run-and-gun style, with both teams trading quality chances.  The Blueshirts got a little too aggressive on their puck pursuit at the offensive blue line, and got burned in transition for a Flames 3-on-2.  After a shot from the trailer went high over the net, the Flames threw the puck into the crease.  Diaz got turned around and overpowered by Kevin Westgarth for the bang-in goal.

The eventual game winning goal took everyone by surprise.  After a tough defensive zone shift (the second straight that sent Brian Boyle off limping), a kick pass caught the Rangers in a change.  The rest of the line looked to have the defensive end covered adequately despite the miscue, keeping Mike Cammalleri to the outside.  With just seven seconds left in the period he fired an innocent looked shot toward Lundqvist, which promptly squeaked through his arm.  This one will haunt Hank’s nightmares.

Another cellar-dweller awaits on Sunday night when the Rangers travel to Edmonton for an 8:00pm tilt with the Oilers.