Fourth line depth a critical key to success for the Rangers 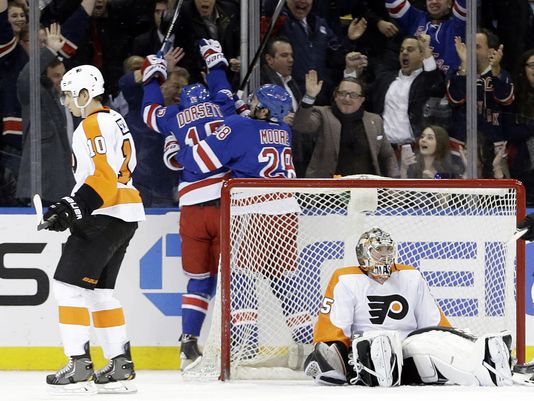 One of the many issues the Rangers have dealt with in the past is depth, specifically on the fourth line. The inconsistency is what led previous coach John Tortorella to play the line just five minutes a night (much to the chagrin of the fans). Last year saw endless combinations of Taylor Pyatt, Darroll Powe, Arron Asham, Derek Dorsett, or –in the playoffs– Brad Richards. In 2011-2012 it was some combination of Mike Rupp, John Mitchell, and a rotating right winger.

The key here is that the Brian Boyle line, whoever he was playing with, was always the third line. The Boyle, Brandon Prust, Ruslan Fedotenko line, the one we all loved so much, was playing top-nine minutes. Not to take anything away from them, as they were one of the better shutdown lines in the game, but that trio –on a deep team poised for a run to the Cup– is a fourth line. It’s something we harped on ’round these parts for about three years.

Our exact quote: “When Brian Boyle is our fourth line center, we will finally have the depth required to make a deep run.”

Well, the Rangers finally have that kind of depth. Boyle, Dominic Moore, Derek Dorsett, and, to a lesser extent, Dan Carcillo have combined to be one of the best fourth lines in the game. Night in and night out, they are tasked with starting almost 70% of their shifts in the defensive zone against some of the best offensive weapons the opposition has to offer. The usage chart below shows just how the fourth line is used for matchups (Carcillo doesn’t meet the minimum games played requirement, so he’s not on the chart): 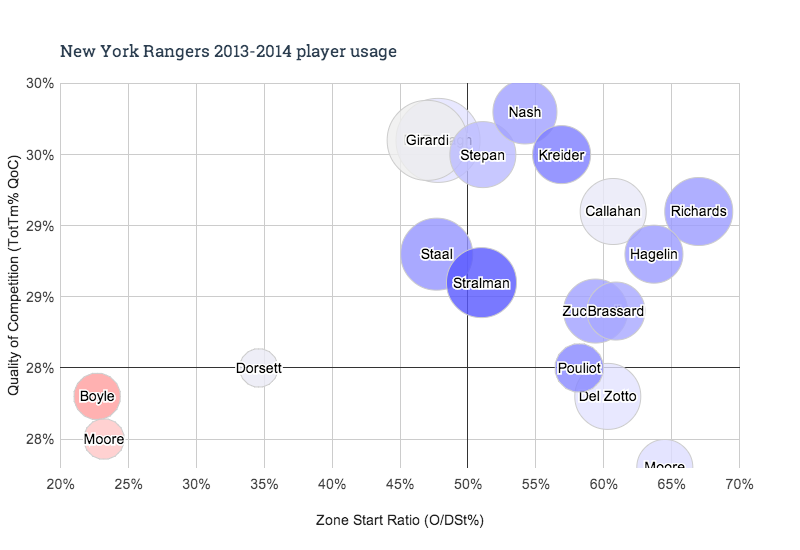 The zone start differences between the fourth line and the rest of the team is ridiculous. They are the only forwards that don’t start 50% or more of their shifts in the offensive zone. There is a level of trust that the coaching staff has in this trio (or quartet if you include Carcillo) that has given the top-nine freedom to create offense. When Boyle anchored the third line in a similar role, the fourth line was relatively useless, and the Rangers were left with just three capable lines.

The quality of competition bar is a bit misleading here, as we would expect the likes of Rick Nash and Derek Stepan to get the top pairing defensemen as their matchup, which is why their QoC is so high. In regards to matchups for the fourth line, we can look at Boyle’s 5v5 Even Strength Against You Statistics from HockeyAnalysis (using Boyle only, as we only need to look up one guy since this trio has always played together, barring injury). This gives us the players that Boyle lines up against the most. Names like Perry, Getzlaf, Ovechkin, Crosby, Jagr, Lecavalier, Staal, and Semin top that list. He’s not playing against the bottom-feeders.

This trio hasn’t been without their struggles. Both Moore and Dorsett struggled early, and until recently, the trio couldn’t contribute offensively on a consistent basis. Now, as the season is wrapping up, both Moore and Boyle are within range of 20 points. Dorsett is on a 15(ish) point pace. They are taking advantage of offensive opportunities when they are able to get the puck deep and work the forecheck. Again, this was something we haven’t seen from the fourth line until this year.

Perhaps the biggest difference is that the Rangers have the top-nine depth to allow Boyle –and in turn, Moore, Dorsett, and Carcillo– to play a fourth line, defensive role. They don’t need to contribute 20 goals or 40 points each. That’s not their job. Their job is to play solid defense, take the defensive zone draws, and chip in occasionally when the opportunity presents itself.