The Re-match and USA/Canada Open Thread 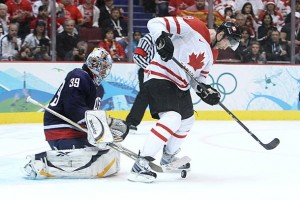 This afternoon, at 12pm Eastern time, the United States will take on their bitter rivals to the north* for the chance at Olympic Gold on Sunday.  After losing to the Canadians in the Gold Medal game in Vancouver (for the record, one of the best international hockey games ever played), I can only imagine the Americans are chomping at the bit for another chance at the Red, White and Black.

Since the Americans didn’t bother to show up to Nagano, Japan, where the NHL marked its Olympic debut, this modern rivalry really got started in Salt Lake City in 2002.  Prior to his tragic passing, Herb Brooks lead an improbable US squad to what should have been a Gold medal (because destiny), but came up Silver to the Canadians.

Neither country had much of a showing in 2006 as we all watched Henrik Lundqvist take Gold home to Sweden, finishing 7th (Canada) and 8th (USA), respectively.  But the rivalry was on full display in Vancouver, once again.  After a round robin win, the young, upstart American team was full of confidence and the belief of a nation.  Alas, Sidney Crosby had other ideas.

Fast forward to February 21, 2014, and the Americans have another chance.  They are four years older, more experienced and more battle tested to succeed on this stage.  Thus far, the Yanks have looked the stronger of the two sides, but we all know that means nothing once the puck drops.

Feel free to use this as an open thread to discuss the game, bald eagles, the cessation of Quebec, the heartbreaking Women’s Gold medal game, or anything else Olympic related.  Will the USA taste sweet revenge?  We will have the answer in a few hours.

*I, myself, am half-Canadian, so feel free to tar and feather me if the USA loses.