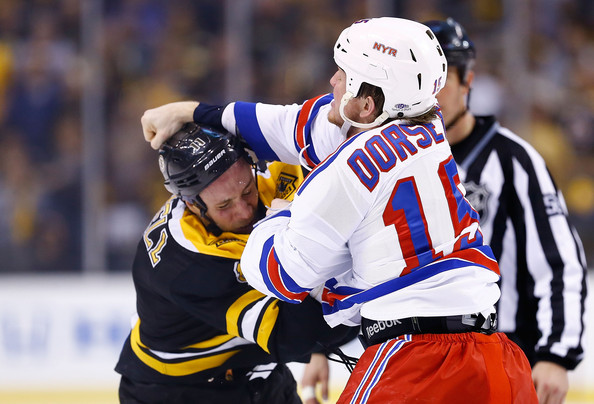 The Rangers facd the toughest possible opponent tonight. When an elite team like the Blues head to town fresh off a mauling, they will be conscious of stopping the rot before it starts. This will be a great benchmark game for the Rangers. Can they go toe to toe with a contender? Can they put behind them their own disappointing game? Tonight’s game is the definition of a character test.

Kevin Klein’s arrival meant the end of Michael Del Zotto, but does it also signal the end of Anton Stralman? Stralman is reported to be looking for $3 million plus at season’s end, despite being distinctly average for the most of this year. Would the Rangers be willing to lock up what are essentially two third pair guys for what would be $3 million each?

Rick Nash’s outrageous recent production has him on course for 30 goals. The media made a big deal about the timing of his return to form and linked it to the Team Canada announcement. Surely it’s much more to do with prolonged health and a return to full fitness? In his current form Nash can carry the Rangers very deep in the playoffs if Lundqvist is also on his game. Not many teams have those kind of game changers.

More Del Zotto fallout: Obviously more focus will now turn to John Moore. Moore has been so-so all season long. The training wheels now need to come off and Moore needs to produce. Talent (as Del Zotto showed) only counts for so much. Expectation and pressure will be much greater for Moore going forward.

With health comes options: When Derek Dorsett gets healthy, coach Vigneault will have some real physicality in the line-up. The opportunity to move Dorsett up and down the line-up while Dan Carcillo annoys teams on the fourth line could be a real x-factor for the Rangers.

The Rangers increased production and eventual health also means consistency for JT Miller. Barring unforeseen issues, Miller should now be left to play out the season with the Wolf Pack. Consistency and ice time are exactly what the talented forward needs right now.