Defense Goaltending State of the Rangers 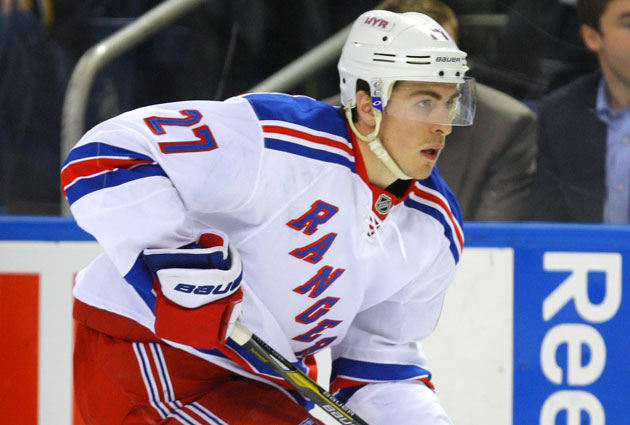 How good can Ryan McDonagh be?

Best case: Johnson is an adequate depth defender and is significantly better than Stu Bickel in spot duty.

Worst case: Johnson is no better than Bickel and the Rangers are back where they were last year if top-six blueliners get hurt.

Best case: Stralman continues to be an unsung hero for the Blueshirts and finally earns the attention he deserves with a standout campaign, including some gaudy power play numbers.

Worst case: Stralman’s hold on the #6 job loosens and Justin Falk pushes him for playing time.

Best case: Allen beats out all the veterans to win the #7 D-man job after a terrific camp and pushes Anton Stralman for playing time.

Worst case: Allen spends the season in Hartford and challenges for a regular NHL job next season.

Best case: Girardi shows that he’s much more than John Tortorella’s shot-blocking crash dummy and returns to form after a down year.

Worst case: Girardi struggles with Vigneault’s more up-tempo style and continues to be a little too reckless with his body.

Best case: McIlrath avoids injuries and puts together a very solid year of development on both ends of the ice in Hartford.

Best case: Moore proves to be the most important piece of the Marian Gaborik deal and surpasses Michael Del Zotto in the rearguard pecking order.

Best case: Falk fills in admirably when a top-six defender inevitably goes down and the Rangers are still able to roll six defensemen.

Worst case: Falk’s poor preseason play is a sign of things to come and he can’t be trusted to play meaningful minutes.

Best case: Weaker vision doesn’t affect Staal and he puts two injury-filled years behind him as Staal returns to being the team’s top blueliner.

Worst case: Staal struggles to adjust to the speed of regular season games with his deteriorated sight and isn’t the player he once was.

Best case: Del Zotto thrives under Vigneault and emerges as one of the league’s better offensive defensemen while improving in his own zone.

Worst case: Del Zotto continues to take a step back for every step forward and isn’t an answer on the power play point.

Best case: McDonagh not only surpasses Girardi and Staal as the team’s consensus top blueliner, but he adds offense, is an All-Star, and draws some Norris Trophy consideration.

Worst case: McDonagh is still unable to harness his considerable offensive potential and ends up on the second pair.

Worst case: More than two defenders are injured long-term and Bickel is again forced in over his head.

Worst case: Lundqvist is still one of the top-five goalies in the league but (gasp) isn’t a Vezina finalist.

Best case: Biron shows everyone the Rangers made the right choice by cutting Johan Hedberg loose with 20 solid starts.

Worst case: Whatever personal issue kept Biron out of camp the first few days lingers into the season and Biron isn’t able to focus on hockey.