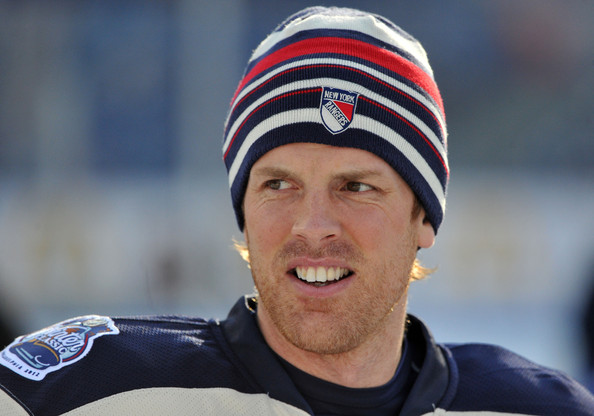 Best case: Asham continues to provide comedic relief on Twitter and plays in a handful of games with the Blueshirts.

Worst case: New York is unable to find a taker for Asham on waivers and he spends the final year of his contract in Hartford.

Best case: The former fourth-overall pick puts it all together as a Blueshirt and records a 20-goal season.

Worst case: The Rangers learn why Pouliot has already played for four teams in his young career and the big forward is invisible most nights.

Best case: Richards is a man on a mission after a disastrous 2013 season and he proves all the doubters wrong with a big bounce-back effort.

Worst case: 2013 wasn’t a mirage and Richards plays like an over-the-hill veteran leading to his contract buyout.

Worst case: Dominic Moore does more in Boyle’s old role and Boyle is unable to find a home on the wing.  He rotates in and out of the press box and is dealt at the trade deadline.

Best case: An injured shoulder does nothing to affect Hagelin’s lightning speed and he doesn’t ‘stink’ on the power play, in fact he becomes one of New York’s surprising offensive contributors.

Best case: 2013 was nothing more than a bump in the road as Kreider takes major steps toward fulfilling his considerable potential and becomes the Blueshirts’ #2 scorer behind Nash.

Worst case: Kreider continues to struggle at both ends of the rink and is given more time in the AHL while prospects like Jesper Fast and Danny Kristo leapfrog him on the depth chart.

Best case: Kristo makes GM Glen Sather look like a genius as he sees time in the top-six while Christian Thomas continues to play in the American League.

Best case: Powe shows some value as a penalty killer and sees spot duty on Broadway.  Maybe he even scores a goal!

Worst case: Powe starts in the AHL and never again makes it back to the show.

Best case: Dorsett becomes Brandon Prust 2.0 and provides a spark every night while chipping in the occasional goal and protecting his teammates.

Worst case: Dorsett joins Powe, Asham and Taylor Pyatt in a rotation for the final spots on the wing.

Best case: Missing training camp doesn’t slow him down at all and Stepan flourishes under a more offensive-minded coach.

Worst case: The contract stalemate drags into the season and Stepan is a step slow after missing a crucial introductory period with Alain Vigneault.

Best case: Brassard’s performance after coming over from Columbus last year was no aberration and he becomes the team’s #1 center in Stepan’s absence.

Worst case: Brassard’s old feud with former coach Scott Arniel becomes a distraction and he returns to the maddening inconsistency that drove the Blue Jackets nuts.

Best case: Moore’s tremendous preseason is a sign of things to come and he fulfills the ‘Manny Malhotra’ role for Vigneault.

Worst case: A year away from the game is too much for Moore to overcome and he’s merely a depth forward.

Best case: The Swedish rookie earns a spot as a sub for New York’s two injured wingers and doesn’t give it back thanks to an impressive combination of speed, skill and tenacity that translates well to the NHL.

Worst case: Fast’s twig-like frame can’t handle the physicality of the North American game and he struggles in Hartford.

Best case: Miller puts nagging injuries behind him and contributes on both ends of the ice.

Worst case: Miller is behind the eight ball and is unable to get back on track until later in the year, pushing his full-time NHL arrival to 2014.

Worst case: Zuccarello continues to be little more than a possession driver and shootout specialist.

Best case: The Swedish rookie forces his way into the opening night lineup and shows that he belongs in the NHL as more than a defensive specialist and faceoff ace.

Worst case: Lindberg spends the year in Hartford thanks to New York’s center logjam and he watches fellow rookies Fast and Kristo thrive on Broadway.

Best case: Nash comes out with a chip on his shoulder after a disappointing playoff performance and makes a run at 50 goals.

Worst case: Nash is the team’s only reliable goal scorer and is worn down by opposing defenses as the year drags on.

Best case: Callahan misses minimal time and puts up career high numbers after Vigneault puts him in a position to maximize in the considerable offensive talent many people forget about.

Worst case: Callahan isn’t 100% when he returns and struggles to find his role under the new coach.

Best case: Pyatt is given new confidence from his old coach and carves out a niche in the bottom-six as a power forward.

Worst case: Stu Bickel beats Pyatt in a footrace and the veteran is relegated to the press box.