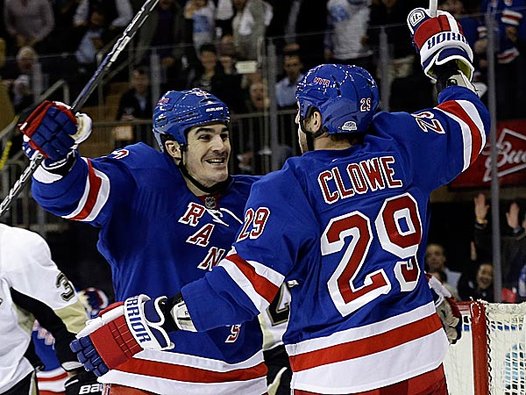 Is Ryane Clowe less likely to re-up with the Rangers because of AV?

As we approach the draft weekend and the Stanley Cup playoffs are over, the Rangers get ready to enter the offseason with a new leader at the helm. We’ve beaten the Alain Vigneault-analysis angle to death so let’s just jump into another musings instead.

Artem Anisimov has turned his move from the Rangers into an almost $10m, 3 year contract. Good for him but it’s another example of a struggling franchise overpaying to keep players happy. Based on production, Anisimov is not worth 3.25m per year. That said, maybe he earns it during the deal.

If Kris Letang goes to the Leafs it would be a huge mistake by the Penguins. Yes, his demands may be out of whack but that club needs balance and he’s arguably the best offensive defenseman in the league after Karlsson.

People shouldn’t assume Ryane Clowe will be back with the Rangers because he’s been medically cleared. He has had ‘history’ with the Canucks, had an almost public feud with the club up North. Remember who last coached the Canucks?….

Intriguing: Jaromir Jagr is going to be an unrestricted free agent. I would still take him if he would accept close to the league minimum, especially with Ryan Callahan and Carl Hagelin hurting. That said, he and the Rangers are clearly at different stages, timing isn’t great.

There seems to be some criticism being levied at the Avalanche for not embracing the hometown kid, Seth Jones this weekend. Assuming they do take him, I think MacKinnon is the right pick. He’s a potential superstar forward.

It’s funny how ‘Alain Vigneault is the right guy at the right time for the Rangers’. I think Tortorella is in exactly the same situation in Vancouver. Both moves could work out well.

Will the assistant coaches be determined before the draft? It will be interesting to see how the Rangers go with their assistants. With NHL experience an essential criteria, it’s a shame the club have again ruled out Brian Leetch’s involvement.

Very quietly, this coming pre-season is going to be a very important one for JT Miller when you consider the prospects such as Kreider and Lindberg will be competing for roster spots, a change in management and the injuries up front for the Rangers. Miller needs to make a statement.

The Rangers have a host of prospects that will be looking to make a run at the big club this coming pre-season. While he’s likely to begin the year in the AHL Michael St Croix is worth watching after a 92 point season with the WHL’s Edmonton Oil Kings. He followed it up going over a point per game in the playoffs. St Croix could be another mid round draft steal.

A player that may benefit from the injuries among the Rangers forwards is Christian Thomas. Like more established players such as Mats Zuccarello, Thomas has a chance to step up and get some minutes in a scoring role early on. A big pre-season could really work in his favour as he showed in his cup of coffee with the Rangers that he wasn’t afraid to shoot. He probably deserved another game or two after his initial showing. Despite an underwhelming AHL season, Thomas still has a chance.