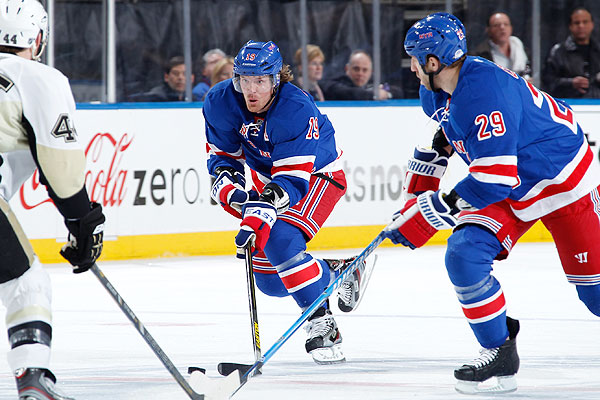 Both poised for bounce-back years. Will they do it? (Scott Levy/NHLI via Getty Images)

It’s no secret: Brad Richards and Ryane Clowe had disastrous seasons. Richards was a non-factor for the Rangers on the powerplay –something he was brought in to help bring back to respectability– and was even a healthy scratch for the last few games of the postseason. Clowe didn’t score a goal until he arrived in New York before suffering what is rumored to be two concussions over the span of the last week of the season and his two playoff games.

What we do know is that they were both awful. What we don’t know is whether or not these were off-years or the sign of a complete downward spiral for both players. However, handy-dandy puck possession metrics and shooting percentages can give us a bit of insight into what to expect from them next year, be it in New York or elsewhere. Yesterday I looked at the puck possession leaders for the Rangers, and both Richards and Clowe were among the top five for the Rangers, which may allude to the fact that there’s still gas in the tank.  Insert “watch the game nerd” joke here.

As for Richards, his shooting percentage last season (10%) was actually above his career average (9%), and his shot per game (2.39, 110 shots) weren’t that far off from last season (2.79, 229 shots). Where Richards stands to benefit the most is with the coaching change, which is ironic because he came here to play under John Tortorella once more. When with Dallas –in a 1-2-2 forecheck and a more offensive minded system– Richards never dipped below 270 SOG.

The problem with Richards is that he appeared to lose a step. He isn’t exactly young, but the move to a less aggressive system should help with Richards. He’s not being counted on to play defense, he’s being counted on to provide offense, and AV will deploy him as such (the Sedins got 70% OZone starts until this season). Keep in mind, Richards didn’t exactly sit around and not produce. He still put up a line of 11-23-34, which is a 19-41-60 pace over 82 games. Not great, but not exactly Darroll Powe.

As for Clowe, we all know he was incredibly snake bitten before coming to New York. Clowe shot an abysmal 3.4%, well below his career average of 11.2%. He started to show signs of life with the Rangers, shooting at 13.6% over 12 games before going down with his concussions. Pair that with his solid RCorsi, and you have a player that just got unlucky. A simple regression back to the mean will lead to a solid season for Clowe.

Richards is the more likely of the two to remain in Ranger blue for next season, especially with AV on board. Top-six centers are tough to find at a reasonable price –it is very scary that $6.6 million for next season for a top-six center is actually considered reasonable for guys who aren’t under team control, but such is the life of a “star” player– and if it weren’t for the eleventy billion years left on Richards’ contract (7 years), then not many would have an issue with that contract. Clowe on the other hand likely won’t be back, and is the bigger risk because of all of his concussions last season (3). However Clowe is more likely to rebound in a big way than Richards.

The Rangers might be best holding on to Richards for another year (I’m in the minority here) and taking a chance that he rebounds. There is a risk of injury (and the potential to not be able to buy him out next year due to said injury), but sometimes you have to take a big risk when your Cup window is open. After all, how many 60-point centers are on the market this season? As for Clowe, it’s almost guaranteed that he at least has some sort of bounce-back year. He won’t shoot 3.4% next season. If he doesn’t price himself out of New York, he could be a welcomed bargain. The Rangers need depth, and these two guys give it to them –if they bounce back.