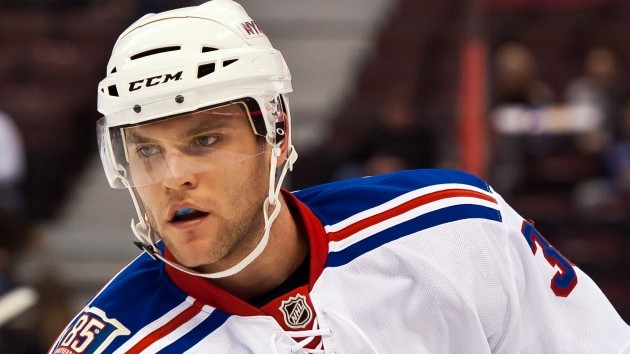 We may have seen the last of Michael Sauer in the NHL (Marc DesRosiers-US PRESSWIRE).

Michael Sauer hasn’t played a game for the Rangers since taking a clean Dion Phaneuf hit along the boards in December of last season. His absence had left the Rangers with a huge hole on the blue line until the recent acquisition of John Moore, but still leaves a physical hole that has yet to be filled. Sauer’s cap hit last season was $1.25 million, which is the same number as his qualifying offer as the defenseman enters restricted free agency.

By offering Sauer his $1.25 million QO, the Rangers retain his rights for at least the next season. They will also give themselves the opportunity to receive RFA draft pick compensation should a team sign Sauer to an offer sheet. While this is probably painful to hear, Sauer’s playing career is likely over. The team has all but said that they do not believe he will play with the Rangers –or in the NHL– again. It is truly unfortunate. But for that small chance he does play, the Rangers would be taking a risk in keeping Sauer on board.

There are a few things at play here for the Rangers and re-upping Sauer, who if offered a QO will almost certainly accept. The most obvious issue is the salary cap. If the organization decides against  Brad Richards buyout –and it looks like they will go that route– then they will have less money to work with to get their RFA’s that actually play under contract. Of course, the Rangers could simply use LTIR for Sauer to essentially remove the cap hit, so this is essentially a wash.

Perhaps the bigger issue is the number of contracts signed. Each team is allowed 50 contracts, and we saw this come into effect this season when the Rangers waived Jeff Halpern. They needed to clear a spot on the reserve list, and Halpern was the most likely to get claimed. It also was a factor in the Marian Gaborik trade, as the Rangers needed to throw in two additional contracts in order to obtain all three players from the Blue Jackets.

Since most teams leave wiggle room under the 50 contract limit, assume the Rangers want to get to 48 contracts as a maximum. At this juncture of the offseason, the Rangers are committed to 39 contracts. That number jumps to 43 when the Rangers sign their four core RFAs. If the Rangers re-up Benn Ferriero and Brandon Mashinter, that number gets to 45. That leaves the Rangers with three spare roster spots for UFA signings and/or trades. If Sauer is signed, that leaves them with just two roster spots to work with. There’s not much room to work with if Sauer’s on board.

Sauer was an integral part of the Rangers top-four before going down with his injury. His injury started a chain of events that led to Stu Bickel playing considerable time, then not at all, then the Rangers essentially playing five defensemen, then to the now necessary Marian Gaborik trade –which was made necessary not just by the need for forward depth, but for the need to fill that bottom-pairing hole they had since Sauer went down with his injury.

The worst part is that a promising NHL career appears to have ended with that thunderous Phaneuf hit. Hopefully Sauer will be able to recover from this injury and play again in the NHL, but the Rangers would be taking a huge risk by adding him to the 50-contract reserve list. Sometimes the business of hockey rears its ugly head, and this appears to be one of those times.