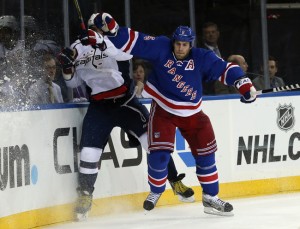 Defense was a hallmark of the 2011-2012 New York Rangers.  It was arguably the key ingredient in their run to the Eastern Conference Finals.  They had an unwavering commitment to shot-blocking and solid play in their own end.  Even without a ton of roster turnover, the unit was not as proficient as they were last season, but still had a solid campaign overall.  Let’s look at the individual contributions of each blue liner…

McDonagh experienced a slight drop off from his 2011-2012 form, but overall showed off a much more well-rounded game.  Although his point totals remained very similar to last season, he showed an increased willingness to jump up into the play and be more involved in the offense.  He still plays a top-notch, shutdown defensive game and can eat workhorse minutes.  As his offensive game improves, he could develop into a Norris level defenseman.  Let’s not forget, he’s only 24.  A-

The story on Girardi is very similar to McDonagh.  He enjoyed a very solid season despite a small dip in form from the previous one.  He is most valuable in that shut-down role, and questions will continue to persist about his value to a new coach and a different system.  I think guys that can shut-down the top scorers of the opposition consistently, while playing big minutes, will provide serious value in any type of defense structure.  A-

Staal started the year off playing phenomenal hockey.  He appeared to have put the concussion issues that plagued him last season, until he took a puck to the face.  He only appeared in one game after March 5th, and the Rangers suffered his loss dearly come playoff time.  I fully expect a rebound next year if his recovery is complete.  B

Stralman had something of an uneven year in this lockout shortened season.  There were times I watched him play and thought he looked completely lost.  Other times, I felt like I was watching a legit top-4 D-man.  Regardless, he has emerged as a solid rotational defender for New York the past few seasons.  He can play top-4 minutes in a pinch, and is a solid option on the bottom pairing.  Hopefully the Rangers acquire the depth this off-season to play Stralman in the role he is best suited for, but he did a fine job this season.  Plus, he’s all about the hip check.  Which is awesome. B+

Speaking of uneven, DZ sure takes a beating around here.  His season was marred by inconsistency and a lack of offensive development.  Coming off a fantastic 2011-2012 season, the fans and the organization were surely looking for a step forward.  Del Zotto’s future with the Rangers is in something of a state of flux, but I’m betting he settles in as a nice complementary defenseman, but I think that “true powerplay QB” projection is quickly becoming a pipe dream.  C+

John Moore was a revelation for the Rangers upon his arrival from Columbus in the Marian Gaborik trade.  His explosive skating and hard accurate shot endeared Moore to the fans early (not to mention his fighting prowess), and it seems that shot of confidence helped establish the young defender as a core piece going forward.  As mentioned before, it would be nice to have the depth to move him into a more prominent role at his own pace, but Moore is going to be very important for the defensive unit going forward.  A-

Eminger has been a reliable depth piece for the Rangers for the past several seasons.  He is ideally situated as the 7th defenseman, but he performed admirably, even in top-4 duty this season.  He isn’t the flashiest defenseman, but he gets the job done.  B+

Claimed on waivers after Staal went down, I understood the acquisition at the time.  That being said, Hamrlik was pretty terrible overall for the Blueshirts.  He had a few stretches of competent play, but it was a lot of slow-footedness and poor judgment.  D

I kinda feel bad for Gilroy.  He definitely had a few boneheaded plays this season, but I thought overall he wasn’t that bad.  Clearly Torts didn’t trust him farther than he could throw him, so Gilroy didn’t get a whole lot of ice.  Instead of slamming him, since he only played three games after Feb. 26th, I’ll give the Bellmore, NY native an INC