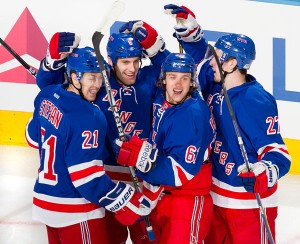 Did the Rangers forwards play up to their ability?

Deciding on grades for the Rangers top six forwards is a bit tricky given John Tortorella’s penchant for mixing his lines and moving players up and down the line up because of his almost infamous lack of patience. Who knows, maybe his propensity for constant change had a part to play in his dismissal. That all said; with another Rangers season over (in underwhelming style) let’s look at the Rangers offensive producers.

It’s probably not in my best interests to admit this when hoping you read to the end, but I have no idea what has happened to Brad Richards or how to explain his startling fall from grace. Richards was brought in to remedy the Rangers depth issues at center and to help improve an under performing powerplay. He’s done anything but in either aspect. Richards followed up an acceptable first year as a Ranger with a disastrous second.

His regular season was full of scoreless streaks, a lack of confidence (that got worse as the season progressed), and his mere presence on the powerplay became enough to worsen the unit. Richards’ game has disintegrated to the point that every beat writer has already written him off as a buy out this summer. What makes Richards’ season somewhat puzzling is the hot streak of sorts at the end of the regular season that offered one final slither of hope that he was rebounding. It was a false dawn. It’s highly likely his last days as a Ranger were spent in the press box. Grade: F

Derek Stepan may have been the biggest bargain in the NHL this year. Regular season and playoffs combined, Stepan cost a measly $17,857/point. Compare that with Brad Richards who cost over $190,000/point, and sometimes statistics can tell the whole story. Stepan stepped up in a huge way this year, even more so when factoring in his somewhat slow start to the year.

Where do you start with Stepan? At 22 he was tied second in the league for game winning goals in the regular season, fifth in the league in plus/minus, and some well respected media types considered Stepan in the Selke trophy debate. Whichever way you look at it, Derek Stepan stepped up and became the Rangers top line center, and took a big step toward being an elite center in the NHL. With an impressive hockey IQ and a publicly expressed desire to be a career Ranger, the young and mature center has an exciting future with the Rangers.

If you want to find a criticism or two it would be his somewhat muted finish to the playoffs (where he still led the Rangers in goals and game winners). From a development perspective Stepan could stand to use his underrated shot more. Stepan will be a rich man in a few months and deservedly so – he’s the future of the Rangers, now. Grade: A+

I used to think Ryan Callahan had a mediocre skill set when looking beyond his impressive intangibles. In the last two years we’ve seen Callahan combine his impressive work ethic and physical play with improved skill that make his overall game a rarely matched blend of everything around the league. When Callahan scores a goal like he did against the Bruins in the playoffs, or puts the moves on an elite goalie such as Ryan Miller in a shootout, or goes and scores four goals against arch rivals such as the Flyers, you begin to expect it on a more regular basis.

Ryan Callahan went through some tough stretches this season, but for the most part he maintained his relentless physical play, his lead by example leadership, and contributed offensively; although he was lacking somewhat from a consistency perspective. Was this lack of consistency to do with the shoulder injury he sustained? It’s hard to draw too much of a conclusion when we do not know to what extent he was effected by the torn muscle in his shoulder.

His playoff form was slightly underwhelming, as he failed to drag his team off its knees offensively. Callahan was at his best offensively when his team were scrambling to make the playoffs, he was there when his team needed him most. If the Rangers can add more talent (or find more offensive consistency) Ryan Callahan will be more dangerous next season. Grade: B

Rick Nash was at times utterly dominant and at other times, the most crucial time of all – the playoffs – he was almost a spectator. While it wasn’t for the want of trying, when you’re carrying an entire franchise’s expectations offensively and being paid accordingly, you need to find a way to do more. That’s what separates the good from the great. Was Nash hurt in the playoffs? Maybe, but his solitary goal against the Bruins showed what he can do – the separation, the quick release, the determination to get to the net; all impressive. There were times in the regular season where you could have been mistaken for seeing number #68 and not #61 on Nash’s sweater, such was his dominance on the puck and ability to draw defenders to him.

While Nash almost always gets the toughest match ups lining up opposite him, he needs to find more consistency next season and avoid scoring in bunches, as he did during his debut year with the Rangers. If there was another criticism of Nash, it’s that the big body that is Rick Nash needs to used more, needs to show some more snarl to go with his almost unrivalled skill set. Nash’s first season as a New York Ranger was a year that offered so much but ended expecting more. Grade: B

The lightning quick Swede could be a unique weapon for the Rangers when they utilize his ability to get separation. Hagelin is a two way player whose offensive upside is tough to judge. Is he a forty point player over an eighty two game season, or does he have a higher ceiling? Hagelin needs to establish some consistency (seems to be a common theme for Rangers offensively this year) and improve his pretty average puck handling. If his hands ever catch up with his feet, then the Rangers have something very special on their hands.

Hagelin, while inconsistent, was always noticeable on the ice as teams had to respect his speed. As a result, he was one of the few Rangers to show any kind of offensive presence in the postseason. Grading Hagelin is, like Callahan, a tricky issue given the revelation of his own shoulder surgery – how much did the injury impinge on his season, on his production and when did the injury take effect?

Unfortunately for Hagelin, his season may be remembered for his coach’s comments rather than for his play, which for a player who generally impressed in his second NHL season is perhaps doing him an injustice. Without being brilliant, Hagelin has cemented his place as a core Ranger moving forward and a puck possession monster, not a bad season when you look at it that way. Grade: C+

Derick Brassard has been a very pleasant surprise as a Ranger. Twenty three points in twenty five games as a Ranger will certainly endear you to the Garden faithful, but Brassard didn’t just impress with numbers. His playmaking and vision appeared to justify the once lofty expectations for the former lottery pick. He was willing to engage physically and he was never afraid to have the puck and try to make things happen. That desire to be a difference maker, to want to assume responsibility, bodes well for the future.

That Brassard led the Rangers offensively in the postseason is probably not a good thing (Hello Rick Nash and Brad Richards), but it does show that the Rangers could have a steal on their hands if Brassard can find the season long consistency that has eluded him in his career to this point.  Grade (based solely on his time as a Ranger): A-

The Rangers were crying out for a player of Ryane Clowe’s type when they added him, and they were crying out for him when their season came to an abrupt end. Who knows how the Rangers season would have finished if Clowe (and Marc Staal) had been available to the Rangers throughout the playoffs. When Clowe was healthy he made a difference for the Rangers. He played physicality, controlled the boards, went to the net (basic concept, done too little by the Rangers generally) and showed offensive production was still within him, as it was in previous years in San Jose.

Clowe – or his type – is an absolute necessity for the Rangers going forward. Whether it’s Clowe – his skating ability and injuries make a long commitment a risk – or another in the same mould, the offseason will tell all. Grade: (based on a small sample size) B-

The little Norwegian made a welcome return to New York, and during his second go-round with the Rangers showed that he can be a difference maker offensively. Unless Brad Richards reawakens, few on this team can rival Zuccarello for hockey vision, and he brings creativity to a powerplay absolutely starved of it.

Physically Zuccarello fared better this time around, and 15 points in 27 games (with fairly limited minutes) isn’t bad at all. If he can work on his tendency to overplay the puck at times and finish more, Zuccarello will be demanding more top six minutes, not just a new contract. Zuccarello was one of the few relatively bright (?) spots offensively during the postseason. He’s done enough to earn a new deal. Grade: B-

What is the real Ranger offense? Is it the one that led the league in scoring after the trade deadline? The one that sputtered through the season, aside from that final month? Or perhaps the one that was so muted in the playoffs? This team heads into the offseason with a ton of questions beyond replacing the head coach, not least determining the ceilings for many of the team’s younger players, and resolving the future of Brad Richards, such a critical issue to the Rangers.