Why defensemen slide to break up plays

So several people on Twitterd and in the comments section here at Blue Seat Blogs asked me a question the other day about why defensemen slide on the ice to break up plays in the defensive zone. Unfortunately, I’ve been working some late hours this week and I missed those questions. Anyway, so Dave brought this issue to my attention, and I figured it would be better to write up the reasoning in a short and sweet post rather than respond to comments that are several days old.

When it comes to defending two-on-one rushes in the defensive zone there’s basically two different approaches coaches teach their players. 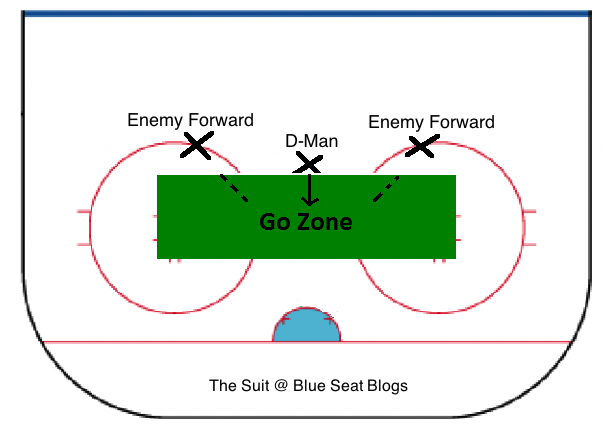 The defensemen should always try to start out in the middle of the ice. Once the d-man has that mid-lane in the defensive zone he can start to read the angle and the proper play. However, he really can’t make a move until the puck carrier skates through the faceoff dots. Most coaches call this the “go zone,” meaning the area of ice where the defensmen must decide what the proper move is to break up the play.

Once the play approaches the “go zone,” the defender essentially has two options. Option #1 is to be responsible for the player without the puck and leave the puck carrier for the goaltender to handle. In order to execute this properly, the defender has to cut towards the open man at the last second and make sure he doesn’t have the chance to tap in an easy back door play. Generally this involves a pivot and tight stick check at the last second.

Option #2 at the “go zone” is to angle the carrier wide and at the last second, lay flat on your belly with your skates facing the goal line to take away the passing lane. This move forces the puck carrier to shoot from a tougher angle, or if timed right, he will pass the puck right into your body. The downside of this tactic is, once you’re down on the ice, you’re no longer in position to defend against a rebound, so it is important that rebound control be one of your goalie’s strengths.

Secondary forwards will typically skate stride for stride with a defender. This makes the d-man’s job a lot easier if the puck carrier and the open man are all on the same plane. However, if you watch odd man rushes by elite players — or other players with a high hockey IQ for that matter — they will often stagger their stride, or make a move to create a passing lane over their inside shoulder. This can take the d-man out the equation altogether regardless of whether they’re sliding or not.

The trick to any defensive play is timing and making the right read. Either tactic can work and either can be a gaffe if the play isn’t executed right. Point is, nothing should ever be automatic. Remember that next time you’re about to throw a “brick” at your television.