With Staal out and Eminger benched, the bottom pairing becomes a problem 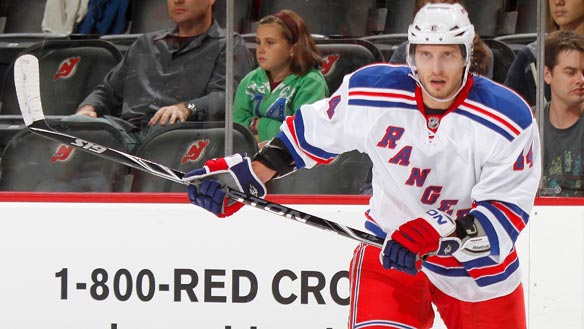 Last night, Marc Staal was a last-minute scratch from Game Four, forcing Steve Eminger back into the lineup. In Games One and Two, Eminger got enough ice time to give the others a rest, playing 10 minutes in Game One and 14 minutes in Game Two. After sitting out Game Three (with Staal in the lineup), Eminger played just six minutes in Game Four, and didn’t see the ice after a gaffe in the offensive zone that led to the Caps first goal.

Perhaps that is just a one game benching, much like we had seen with Brad Richards and Marian Gaborik this season. But we’ve also seen the other end of the spectrum (see: Bickel, Stu) where repeated gaffes led to barely five minutes of playing time per game. Eminger has seen his fair share of benching, but he has also seen top-four minutes under Torts.

The problem here lies with how Torts will deploy his defensemen if Staal is still uncomfortable playing with his blurred vision. We all remember (perhaps remember too well) the Bickel scenario of the last playoff run, when Torts essentially rolled five defensemen and used Bickel sparingly. While it is unlikely that Eminger will get the Bickel treatment, it is likely that his ice time suffers.

Should Eminger have his ice time reduced, using the six minutes played in Game Four as the barometer, then this essentially cuts his ice time in half (the average of his playing time in Games One and Two). This means there’s six extra minutes that the other five defensemen must split. All of a sudden, we are getting to the ice time numbers of the 2012 playoff run.

All things considered, the smart money is on Staal sitting out the remainder of the series. Vision is one of those things that takes time (see: Berard, Bryan), and if he feels it will hinder the team, he won’t play. Personally, I think 17 minutes of a half-blind Staal is better than 6 minutes of a fully-sighted Eminger. That is no slight to Eminger, I just think the club needs to balance out their ice time more appropriately, especially since the possibility of the Bruins looms in the second round.

The handling of the Staal injury and the ice time for the remaining defensemen is going to play a major role in how far this team can run if they get past the Caps. We saw Dan Girardi and Ryan McDonagh tire towards the end of the Devils series last year, and there is no reason to believe that won’t happen again if the ice time doesn’t see some sort of balance. The good news is that the Rangers have the pieces to balance the ice time out, but need execution and a little help from lady luck (i.e.: Staal seeing perfectly) to achieve the optimal balance.