Keys for success for the Rangers against the Caps 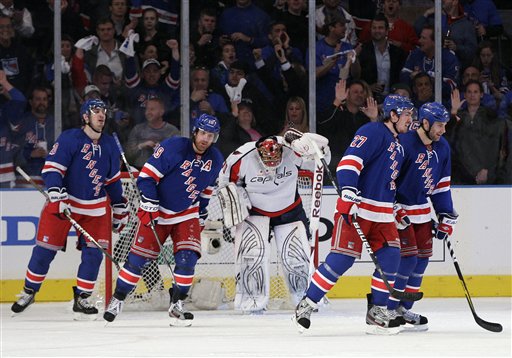 The Rangers have gotten to know the Washington Capitals quite well in recent seasons, beyond the regular season. It goes without saying that there’s not likely to be many surprises facing either side entering this series, so what do the Rangers need to do to steal game one away and take away home ice advantage? Let’s look at the keys to victory for your New York Rangers.

This is the most obvious – and most crucial – aspect of the entire series, as it always is when taking on the Capitals. Without Marc Staal, who always does a great job defending Ovechkin, things will be different. Defending who is arguably the best player right now in the NHL will be done by committee.

The keys will be keeping Ovechkin to the outside, allowing Lundqvist to see the shot and not allow Ovechkin to enter the zone at speed as often as possible. Reports suggest Tortorella will split up McDonagh and Girardi to help negate Ovechkin. This will be key as the Caps look for matchup advantages throughout the series.

Win the battle at center ice

In Mike Ribeiro, the Capitals have one of the most surprising players in the league this year. Everyone knew he was a talented playmaker but he took his game to another level this year and, as Ovechkin started the season slowly, was the player the Caps leaned on offensively. The Rangers have Derek Stepan, Derick Brassard and (finally) Brad Richards all producing offensively. The Rangers arguably have the greater depth down the middle and it will be important to gain control of the faceoff circle to attempt to keep the puck away from the likes of Ribeiro, Ovechkin and Nicklas Backstrom.

Perhaps I’m on my own when I say this but the Rangers can this series without a competent powerplay (phew). What they cannot do however is win by visiting the penalty box too often. The Caps powerplay has an array of lethal weapons, and is operating at almost 27% for the season. If the Rangers take too many penalties it will be playoff suicide. The Rangers will need to strike a balance of playing Ovechkin, Backstrom and co. physically but keeping out of the box.

When the Capitals out shoot teams they win almost 80% of their games, third in the league during the regular season. One of the Rangers’ strengths is blocking shots and against the Capitals it could be the crucial key to success. Anyone who watches Ovechkin knows he loves to rip it off as much as anyone in hockey and getting in front of those shots will be key and will also frustrate Ovechkin. With Mike Green leading the league in goals from the blueline the Capitals can score goals from anywhere on the ice. Girardi, Callahan and co. will need to throw their bodies in front of a lot of shots.

What links all of the aspects discussed above? Goaltending. If the Rangers block a lot of shots, are able to marginalize Ovechkin, control center ice and are able to stay out of the box then they give Henrik Lundqvist a chance to dominate this series. The Rangers are blessed with the best goaltender in the game and if he’s given the support – both offensively and defensively – he can win this series for the Rangers.  It will start immediately in game one as the Capitals will surely come out all guns blazing looking for a strong start.