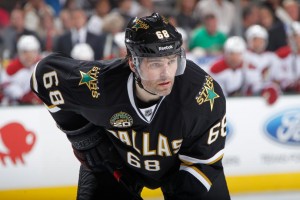 This post is complete speculation and is not intended to infer that the Rangers have seriously considered Jagr or that any negotiations are underway.

In the wee hours of Thursday morning, Penguins GM Ray Shero was able to snatch Jerome Iginla out from under the Boston Bruins.  This acquisition made the Pens incredibly formidable on paper, and took the top RW available off the market.  For this post, however, I want to focus on another right winger, who could have a serious impact on the playoff races this season.  I think the Rangers should bring (back) Jaromir Jagr.

I know that there will be quite a few questions about the recently re-signed Mats Zuccarello, since they will have ostensibly have been brought in for the same purpose.  However, I don’t believe (with all due respect to Zucc) that the Rangers should let his arrival impede a possible pursuit of Jagr.  While Zuccarello is a nice little player, he has something of a spotty track record of NHL success.  Nothing should be guaranteed to him, and anything that will improve the current squad should be considered.

With a quick reference to behindthenet.ca, and an assist from Dave, we get a good look at Jagr’s advanced metrics.  He is still a quality puck possession player, and still slightly above average considering the quality of competition faced. He currently isn’t facing top competition, but he wouldn’t be in New York, either.  Unsurprisingly, he gets more of his starts (after the whistle) in the offensive zone.

From a counting stat perspective, he is averaging a little over 18 minutes of ice time per game.  His point totals are still solid, with 14 goals and 11 assists  (25pts) in 31 games so far this season, 6 of which have come on the power play.  The only concerning stat there is his shooting percentage, 17.3%, which is a little over 3% higher than his 14% career average and by far his highest since his monster ’05-’06 season. (NHL seasons, that is).  While the percentage is off, it’s not outlandishly so.  For instance, Patrick Berglund in St. Louis is scoring at a 28% clip, far above his career average of 13% and double his career high of 14.1%.

From a team fit perspective, Jags could play a role in the top-6, or as a bottom-6 player with a heavy power play focus.  He’s familiar with the organization and the expectations of New York.  By now we have all heard about Jagr’s freakish work ethic, not to mention the mentoring benefits some of the younger guys would get from having him around.

As far as cap space goes, it’s a little bit of a squeeze.  Capgeek leads me to believe he would currently fit, but although Zuccarello is listed, I’m not sure if his $700,000 contract is factored in yet.  Might have to move a body to facilitate Jagr’s $4.5m cap hit.

For a team that is light on scoring and less than impressive on the PP, to me, Jags is a no-brainer.  The guy still has quite a bit left in the tank, and in addition to his puck possession and power play prowess, he’s a veteran guy who knows the org with a Stanley Cup pedigree.  Adding some quality depth for the stretch run while beefing up the power play is never a bad idea and, depending on the cost, I’d take a long look at a reunion with #68. What do you guys think?