This was a tough loss for the Rangers, since they outplayed the Capitals for most of the game. The Rangers out-shot the Caps, out hit them, won more faceoffs, had a better powerplay conversion and blocked more shots. Unfortunately, they just couldn’t get that coveted third regulation goal.

In the first period, there were some crucial shifts for the Rangers following goals and penalties where the Gaborik – Richie – Nash line was deployed and did squat. That line should not be getting pinned in their own zone by the Caps third line. I know everyone wants to have line combos etched in stone, but I thought Torts made the right move putting Kreider with Nasher and Richie in the second period. Kreider was forechecking well and that front line was just flat. It was also a good move to get Gaborik away from the Caps top defensive unit.

Interestingly enough, Torts gave Gaborik a lot of TOI during OT and was seen patting him on the back a lot on the bench. To be honest, I don’t know what else you can do to get Gaborik going.

On to the goals…

Stepan partially blocks a point shot on the penalty kill. The shot took an odd hop in the slot, but Hank was able to make the initial save with his stick. Unfortunately, the puck bounced off of Hank’s stick and redirected off of Backstrom and in. I thought Girardi could have established better positioning on Backstrom, instead of trying to take a swipe at the puck. Tough break. 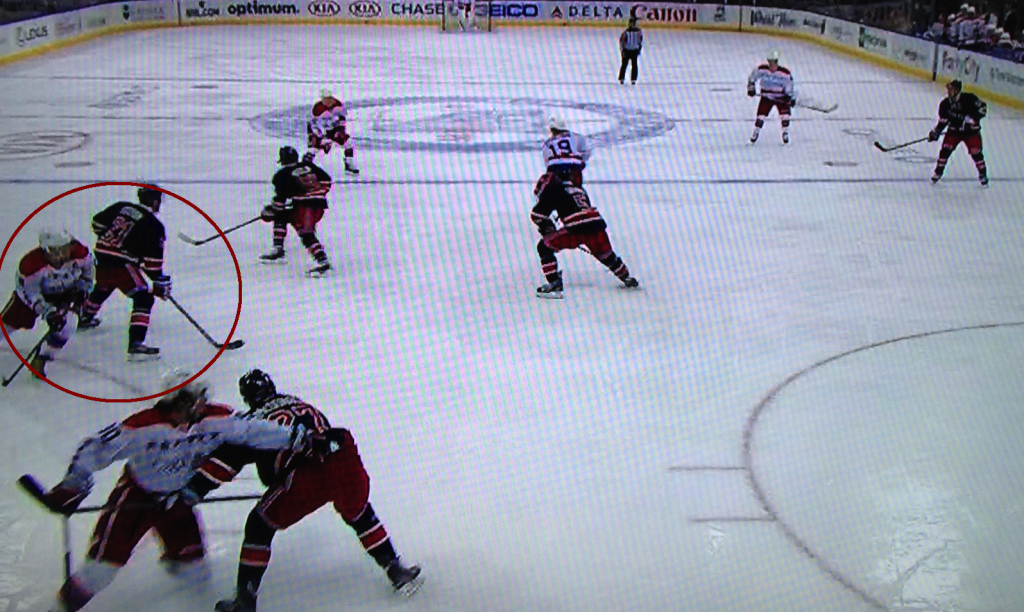 Stepan missed Callahan with an east-west pass at the blueline on an odd man rush. The errant pass lead to a rush by the Caps with Backstrom carrying. Backstrom pulled up on the rush, which allowed all of the Rangers to get back into coverage. Ovechkin snuck around Stepan in the DZ and ended up wide open on the left wing. From there, all Ovechkin had to do was re-direct a point shot passed Hank. 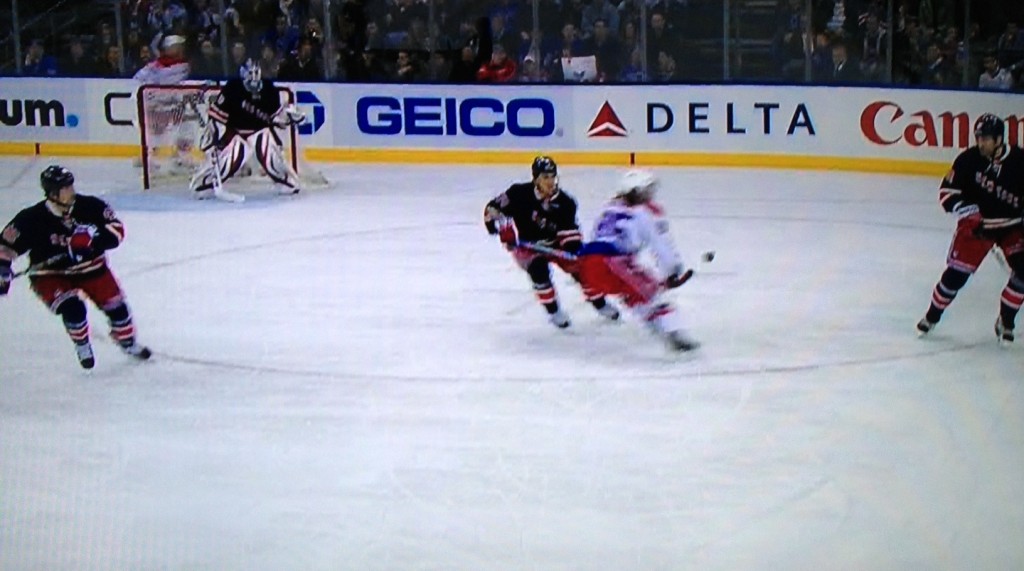 This is an easy one to break down. Mike Green pinched in from the blueline to keep the puck in the Rangers zone. Powe came in and delivered a big hit on Green, which caused the puck to kick out off of the boards. Newbury comes in for support and chips the puck off the wall. Asham collects and a 2-on-1 ensued. Arron finished with a beautiful wrist shot over Holtby’s glove, similar to his first goal as a New York Ranger. Cya Halpern.

Also if you’re a Caps fan, you can throw a brick at Perreault for overcommitment as Newbury was chipping the puck off the boards. That’s what got all of those Caps trapped in the Rangers zone.

The fourth line followed that goal up with a terrific shift in the Caps zone where they were able to draw a penalty. All they had to do was play simple hockey by getting the puck deep, playing physical and establishing their 2-1-2 forecheck. This is what we need out of our 4th line.

It was great to see Stepan rebound and score after being at fault on the Caps 2nd goal. As you can see from the photo, Holtby’s stance indicates that he’s anticipating a lateral pass from Stepan to Nash on the weakside. Holtby’s not going to get away with that at this level. Stepan made him pay with a bad angle goal. Great to see the boys battle back. Would have been nice to have Torts miked up this period huh?