A deeper look into the roster moves from this weekend 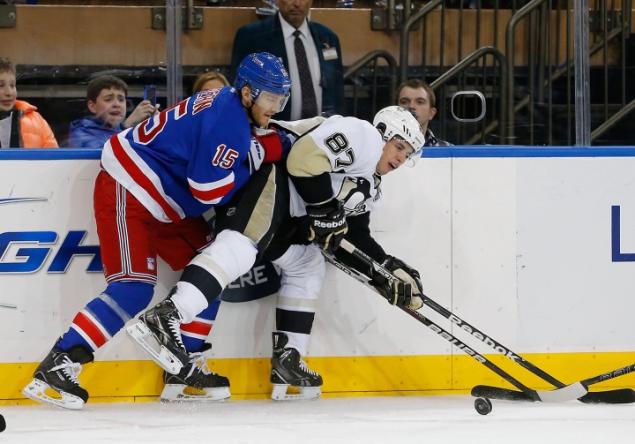 The Rangers were busy this weekend, waiving both Jeff Halpern and Stu Bickel and recalling Kris Newbury from Connecticut. The three moves are, for all intents and purposes, minor moves. But these moves triggered a wide variety of questioning, celebrating, and rumormongering. It was actually very interesting to read all of the speculation Twitter, which included the now famous “Gaborik for Boyle and Clowe” rumor, which is just outright ridiculous*.

*-If this happens, I’ll eat my words. I will also build a Glen Sather statue of him holding 29 “pictures.” These “pictures” will be symbolic of the 29 naked photos he must have of all other GMs, because no GM has this ability to turn spare parts into something substantial as often as he does.

But without speculating, let’s look at the three moves themselves, as each was made for a reason. The easiest one is the Newbury call up. Although we discussed how Newbury would be a replacement for Halpern and Bickel, the call up is most likely due to the recent J.T. Miller injury. I doubt he would have been recalled if not for this injury.

The Bickel move is the other easy one to explain. He has only played in half of the Rangers contests this season, and hasn’t played since March 8. He was also a healthy scratch for a long period of time between February 5 and February 21. In essence, Bickel had become an injury replacement. But he was only an injury replacement when the Rangers were short a forward, which didn’t happen that often. Waiving Bickel was inevitable, although the timing of it was curious.

The move that perplexed many was waiving Halpern, as most (including myself) believed Bickel was the first to go. Halpern was claimed by Montreal –which frees the Rangers of his contract, and gets them to 48 contracts (out of 50), including Jesper Fast– and the decision to let him go might hurt the organization. The Rangers needed to let someone go because Arron Asham was returning to the lineup and the Rangers already had 23 guys on the active roster. The reason why the Bickel move had curious timing is because the Rangers needed the spot, and Bickel wasn’t playing at all. At least Halpern was dressing.

On the ice, Halpern wasn’t scoring at all, but he was playing some of the toughest minutes on the team. He had a GVT of 0.0, which really doesn’t help in evaluating him, but his Ozone start percentage was by far the worst on the team at an incredibly low 26.3%. It is virtually impossible to score when starting that few shifts in the offensive zone. For more proof of that, check out Brian Boyle’s zone starts from 2010-2011 (40.3%) and 2011-2012 (28.8%). The premise is simple: The fewer starts in the offensive zone, the fewer goals.

But Halpern wasn’t brought in for goals, he was brought in for defense. He was deployed in a primarily defensive role; and although his QoC was pretty miserable at -0.171, his QoT (quality of teammates) was pretty abysmal at a -0.242. What all this means is that Halpern may not have been facing the toughest competition, but he was doing it with inferior teammates on his line (see above regarding Bickel, who was Haleprn’s linemate for 15 games). Considering how he was deployed, his Corsi (-9.5 RCorsi, -3.5 CorsiON) wasn’t exactly awful, but Halpern wasn’t exactly driving puck possession. There’s a give-and-take there, as some of this is easier to swallow because Halpern won 56.7% of his face offs.

It’s clear that John Tortorella had no use for Halpern. That said, a guy like Halpern has his uses, especially as a 4th line center or 13th forward with a cheap contract. That’s the type of move you don’t expect a Cup contending team to make. It is perplexing when looking at the move on the surface.

When you go a little deeper, and you look at the number of contracts the Rangers had (49 of the max of 50), they clearly needed some flexibility. Bickel is not going to get claimed on waivers, that’s for sure. Is it out of the realm of possibility that the Rangers waived Halpern because they had a feeling he would be claimed, thus lowering their contracts to 48? Anything is possible, and to be honest it’s not exactly far-fetched, and it’s something I had discussed with some of the other #fancystats guys on Twitter when the move was made. It opens the door for a 3-for-1 trade if Marian Gaborik is indeed traded.

In waiving Halpern and Bickel, the Rangers cleared at least one contract and $1.45 million in cap space for deadline moves. The club has a history of waiving spare parts in preparation for a deal (see: Voros, Aaron), so this type of behavior is par for the course. It could be a precursor for more moves, or it could just be cleaning house.