Book review: Battle On The Hudson: The Devils, The Rangers, And The NHL’s Greatest Series Ever 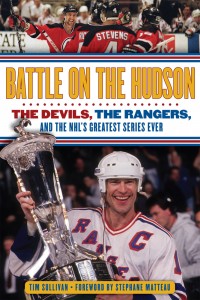 Battle On the Hudson

Recently I was given the privilege of reviewing the book Battle On The Hudson: The Devils, The Rangers, And The NHL’s Greatest Series Ever. The book –written by Tim Sullivan with a foreword from Stephane Matteau– takes an in-depth dive into the rise of the Devils and the Rangers in the early 90s, and how those two teams wound up meeting in the 1994 Eastern Conference Finals. It also dives into each game, and how momentum was able to change so quickly.

The foreword from Matteau documents his feelings when he was traded to the Rangers, and how that feeling changed right as he arrived. He also goes into the locker room and describes the feelings of the club heading into Game Six.

In addition to breaking down each game in detail, Sullivan explains how the rivalry came to be after the Devils arrived in New Jersey in the early 80s.  He also breaks down how the key components for the series made their ways to their respective clubs.

Following the description of each game, including player and announcer reactions, the book goes into the month after the series –when the Rangers won the Cup– and the following season –when the Devils won the Cup– to show how the two teams paths differed.

This book is definitely a good read if you have the opportunity to pick it up.