In extradorinary circumstances, Kolarik not Kreider 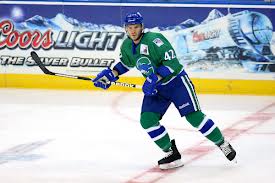 Could the Rangers benefit from a hot Chad Kolarik?

When the Rangers hit the ice in due course (once the CBA is finally resolved), they’ll do so knowing it’s a sprint to finish the regular season. There will be minimal margin for error in player selection and form, and health will be a priority – not player development.

With the likelihood of a conference only playoff-play-in, and the chances of making the playoffs for all teams more even than in a normal season (a quick start in a 48 game season would be huge), no team can afford to carry passengers or tolerate growing pains from individuals. In such an abbreviated season comes opportunity for the likes of Chad Kolarik, and those opportunities need to come at the expense to the likes of struggling prospects such as Chris Kreider.

Kreider of course represents the future of the Rangers, along with bright sparks such as JT Miller and Dylan McIlrath, etc. However, Kreider is struggling and the Rangers – like any team hoping to make the playoffs – need to get off to a quick start. They need to ice the best line up when the season convenes and that means taking advantage of their farm system which has been on the ice for weeks.

Chad Kolarik, under normal circumstances, is a marginal NHL prospect. Given the draftees around him in the system and his age, he should have a chance to grab an NHL spot, and his opportunity would be deserved. Throw in to the mix that the Rangers operate under the mantra of ‘dominate at your level before moving up’ and you get the feeling Kolarik will get a long look from the management.

The Rangers will need additional scoring on the second and third lines, and Kolarik can help. With 26 points in 31 games for a middling Whale side this year, Kolarik has played well. He’s a more offensive type at the NHL level than Kris Newbury, although perhaps both players will get a look given the need to find collective team form quickly.

With 12 goals Kolarik leads the Whale and is a player not afraid to shoot. On the other hand, Kreider has struggled through his first pro regular season and it would be in his (and the Rangers’) best interests that he overcome his struggles outside of the media glare of New York and in the safe confines of Connecticut, where they have more time to teach and support the hugely talented winger. With the Giants and the Jets stumbling badly this year, when the NHL hits the ice the media attention could be greater than normal,w so Kreider would be under intense scrutiny.

Kolarik will come to whatever NHL camp there may be and will be desperate. He’ll know this will probably be his last chance at making the big league and that level of desperation – along with his form – will give him an edge over most of the candidates vying for one of the open roster spots. The talented AHL winger could be the next PA Parenteau. Did the Rangers give up on Parenteau too early? Perhaps, perhaps not… but clearly in the right situation these players – often seen as ‘tweeners’ – have the ability to make an impact.

Don’t rule out the element of surprise. Every coach in the NHL will have seen the impact Kreider had on the playoffs last spring, will have seen his college exploits and will have seen his ability on the international stage. It will be harder for clubs to game plan for the (more) blank canvas that is Chad Kolarik and in such an abbreviated season any advantage could be a deciding factor.

The Rangers owe it to Kreider himself, the players most deserving, and the organisation as a whole to turn to Chad Kolarik ahead of Kreider. It’s not a rejection it’s about short term success. The window to win has already opened after all.