Reviewing our predictions for the New York Rangers (part 1) 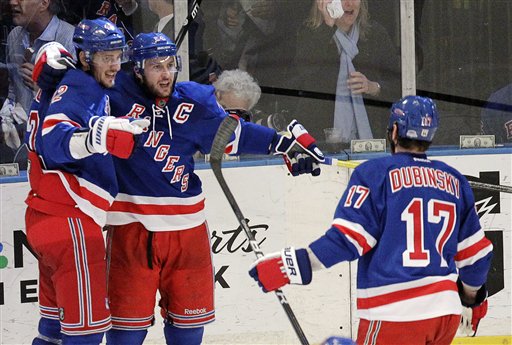 Two summers ago (2011), we started writing posts titled “Reasonable Expectations.” The idea behind these posts was to outline what we should expect from some of our core youth on the Rangers. It’s natural to expect every player to turn into a first liner, but that’s not reality.

When we wrote these expectation posts two summers ago, they were obviously for last season (2011-2012). Now that the season has come to an end, Suit brought up a good idea to track how we did with our predictions. Since it was my idea to start with the Reasonable Expectation posts, it only makes sense that I go first.

Beginning in February of the 2010-2011 season, I wrote three Reasonable Expectation posts: one for Michael Del Zotto, one for the Brandon Dubinsky/Artem Anisimov/Ryan Callahan line, and one for Tim Erixon. Considering the players I wrote about, it looks like I have a kiss of death. Apparently if I write a Reasonable Expectations post about a player, he has a 60% chance of being traded for Rick Nash.

My predictions were the following:

Let’s get the obvious one out of the way first: I missed on Erixon. He was not as NHL ready as the Rangers hoped he would be. Erixon spent the entire year in the AHL before being shipped to Columbus for Rick Nash.

Del Zotto was a tricky one. Without a doubt, he put a miserable sophomore season behind him. Even though he wasn’t lining up against top competition regularly (-.01 QoC), he showed significant improvements in his own end. He also put up a line of 10-31-41, which made him the highest scoring Ranger defenseman. I’d say I hit the nail on the head with MDZ.

As for Dubi/AA/Cally, I predicted nothing more than 20 goals and 50-60 points. I also stated that anything less than 10-15 goals would be a disappointment. Well I missed on Cally, who exceeded my predictions by far with a season of 29 goals and 54 points. Anisimov finished with a line of 16-20-36, which is pretty good considering he played about seven seconds (exaggeration) on the powerplay all year. Dubi had a miserable year, with a line of 10-24-34.

While I was off on the scoring for the Dubi/AA/Cally trio, I was certainly on the money with the blue collar hockey. All three were relied upon to provide solid defense, and all three excelled in that manner. Yes, Anisimov too, who played with a positive QoC (.005) and was still fourth on the team in RCorsi (2.9).

Of course, the two that “underperformed” per my expectations got shipped out as well, but that’s has less to do with performance and more to do with roster structure than anything else.