How the AHL clause affects the Rangers and Wade Redden 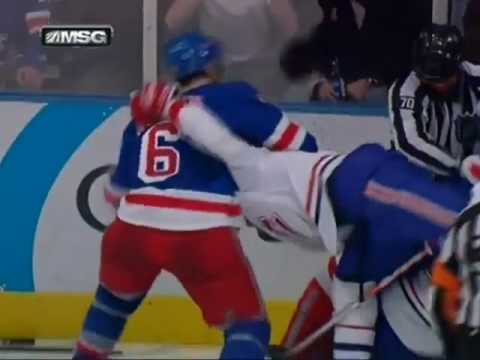 When the NHL’s proposal was made public, the clause that scared a lot of fans was that AHL clause. The clause states that those players making over $105,000 in the AHL — on NHL contracts, as in they signed with the NHL club — will have the difference count against the NHL salary cap. For those keeping score, that means that of Wade Redden’s $6.5 million cap hit, $6.4 million will count against the NHL cap.

This clause — dubbed the Wade Redden clause — is designed as a prevention against cap circumvention. When looking at the Rangers, there is no way they would have been able to afford Marian Gaborik and Rick Nash if they still had Redden on the books. This clause is aimed at that, but believe it or not, it doesn’t really affect the Rangers.

Redden’s cap hit would be $6.4 million. That leaves $4 million to get Michael Del Zotto under contract. This year is no problem. But what about next year?

I had mentioned earlier this week that the Rangers were in a good position with the salary cap, and while this AHL clause — IF it stays in the CBA — would create some havoc for next season , it wouldn’t be a season breaker.

Assuming 5% growth in revenues (moderate educated guess), then the cap would rise by about 5%, making the ceiling about $62.9 million. The Rangers have $51.8 million committed to next season, and $58.2 million including Redden. The issue here is that the Rangers will need to give contracts to Carl Hagelin, Derek Stepan, and Ryan McDonagh, all coming off their entry-level deals.

The new CBA is aimed at curbing the value of second year deals, and while market value is tough to read on a new CBA, it’s safe to assume that none of these guys will be getting the $4 million a year that the Claude Giroux’s or the Cam Fowler’s are getting.  It also isn’t Glen Sather’s M.O. to sign players to big deals on their second contract. Only Marc Staal got a significant bump in his second contract. Not even Ryan Callahan was awarded a $4 million salary after his ELC expired.

Let’s use the assumption that all three players get a 150% average increase on their salaries (note – not on their cap hit). This puts Hagelin at about $1.6 million, McDonagh at $2.2 million, and Stepan at $2.2 million. Using the same estimation on the MDZ contract, it puts him at  $2.2 million as well. That’s an extra $8.2 million on the books. Add that to the $58.2 million committed already, that puts the Rangers at $66.2 million.

Looking at the raw numbers, it puts the Rangers over the cap. But we are missing one little detail here that makes a big difference. The players themselves, although their contracts are guaranteed via deferred payments, would be taking a hit on their immediate salaries by about 7%, possibly more. The fine print of the offer from the owners says that there would actually be a rollback in salaries, but the contracts are guaranteed by these deferred payments. It’s fine print, but it makes a big difference.

Are these the exact numbers we are going to see? Not a chance. This is an estimate based off what we know from the proposal and educated guesses about where the cap ceiling is headed.

One thing to remember: The NHL tried to put this AHL clause into the CBA in 2004-2005, but failed. There’s a solid chance that this AHL clause isn’t even going to wind up in the final CBA. But even if it does, the Rangers should still be in good shape.