If you’ve ever followed a twitter feed during a Rangers telecast, then you’re probably aware of the attempts at “color analysis” that often take place. Now I’m not one to call out the preponderance of errors from the Joe Micheletti’s to be, but I do cringe at some of the faulty finger pointing.

To alleviate some of this we figured it’s about time we get back to basics and open up our hockey systems playbook. Today we will focus on executing 2-on-1s, since they often produce plenty of tweets that will read, “OMG! Dubi should have shot the puck!” or “Why the **** did Richards pass?”

In today’s NHL, an odd man situation is often a team’s best chance to score, thanks to an ever increasing sophistication to team defense & penalty killing. That’s why it is crucial these rushes be executed to perfection.

The most important aspect to getting a good quality shot on net in these situations is reading the defender. First you have to read the defender’s body position. Is he cheating toward you or his playing the pass? Defenders are taught to take away your “time and space.” This means if he’s cheating towards you, then his goal is to force you wide and eliminate your shooting angle. You also have to be cognizant of the defender’s handedness. Is his forehand facing you or is his backhand? His stick angle will tell you if he’s playing the shot or the pass.

For example, in this image below Cally and Dubi are on a 2-on-1 rush that ends with Cally putting a soft wrister right into the keeper’s belly. Looking at the photo and his options. Do you think he made the right decision? 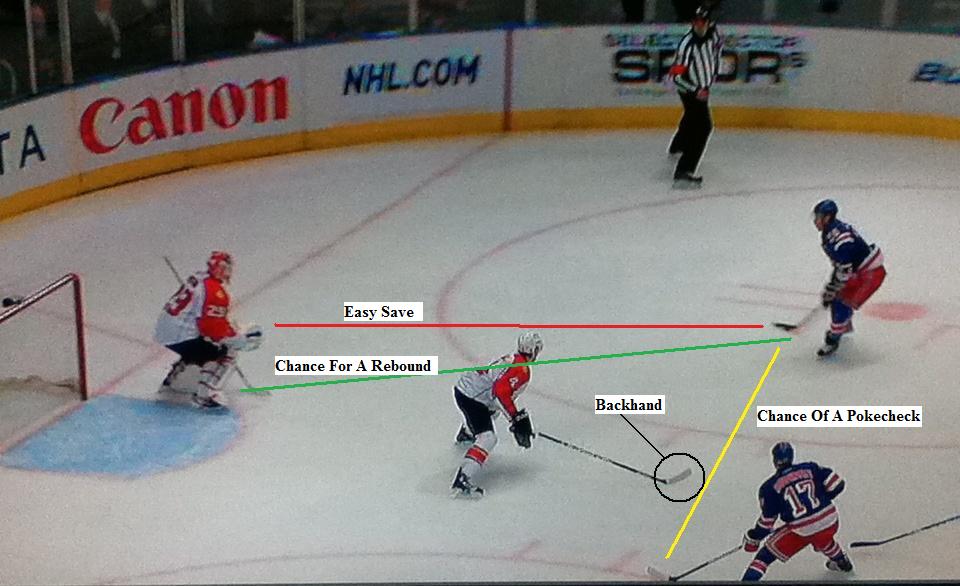 Secondary forwards will typically skate stride for stride with a defender, which makes the d-man’s job a lot easier if the puck carrier and the open man are all on the same plane. However, if you watch odd man rushes by Stepan, Ansimov, Gaborik – or other players with a high hockey IQ for that matter – they will often stagger their stride or put a move on to create a passing lane over their inside shoulder. This can take the d-man out the equation altogether. Gaborik has scored plenty of goals this season in this fashion. Check out this one from an Arty feed below.

Perhaps one of the best transition rush players in the league is Zach Parise. If you watch him on 2-on-1s or 3-on-2s, you’ll notice that he’s awesome at driving to the net for deflecting fake shots/hard passes at the far post. When executed right, it’s an easy tip in and another great offensive tool he has in his arsenal.

Ultimately, whether the correct play is to pass, shoot for a goal, shoot for a rebound, or fake a shot, it all comes down to reading the defensemen (and reading the goalie, though at the NHL level they don’t typically give you much). Point is, nothing should ever be automatic. So remember that next time you’re about to throw a brick at your television.