-That was a hell of a win against Pittsburgh. Hell of a win. I’m not going to get into the refs, because this is a site for all, and I’d like little kids to be able to read this. Obviously, the Rangers, if they lost, would have been robbed. But, man, what heart. What character. I think that’s something different about this team than in past years. There’s more heart. There’s more soul. There’s more of a team mentality that I think has been missing the past couple years.

-What a pass by Dubi. What a pass. You only see that in video games.

-All hail the King

-This team is only going to be strengthened when Michal Roszival comes back. I don’t think Gilroy is cutting it, and I think the wise move is to try and trade him, maybe get a spare part for him, or at least a pick.

-Willow Smith Interlude: I’m sorry, but a nine year old girl should not be singing a song that talks about haters and partying. She’s nine! Nine! When I was nine, I didn’t know about haters or partying. I was most likely playing shinny. I mean, I know she’s Will Smiths’ daughter, and the song is catchy as hell. But she’s nine. Too young for me.

-Hey, look at Frolov scoring and getting into the mix!

-A friend sent me a picture of the Boogey man about to fight in the Edmonton game. Take a look 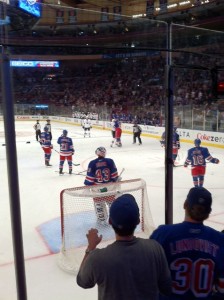 -Speaking of Boogey, shouldn’t he not be getting hurt after every fight? Hasn’t be missed a bunch of games because of hand injuries? If you’re a fighter, you’re going to punch and your hand is going to hurt. But shouldn’t he be able to play through it?

-I hate the Penguins

-Also, how did this team survive with out Gabby? Can someone tell me? Anyone? Bueller?