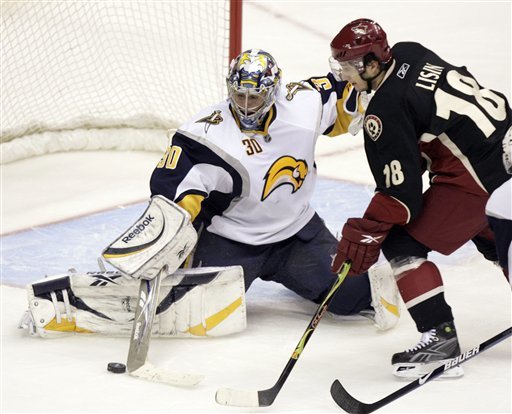 Lisin, the RW received for Lauri Korpikoski, is 23 years old and just finished his 3rd season in the league. The 2004 2nd round (50th overall pick’s best season was last season, where he played 48 games and finished with 13 goals, 8 assists, and a -13. While a -13 is never pretty, take it with a grain of salt because it was Phoenix after all. While his numbers are not overwhelming, his scouting report, as touched on by Mike below, is very promising.

Lisin is a talented two-way forward with a huge offensive upside and a significant defensive upside. The young forward was more than likely the fastest forward eligible for the 2004 NHL Entry Draft. He is fully capable of developing into a top line forward in the NHL. He’s an amazing skater, who’s a good finisher, has a great wrist shot, is very precise and has a deceivingly quick release.

Skating: An amazing skater…the fastest Russian skater and possibly the fastest skater in the world born in ’86…excellent technique. Shot: A very good finisher and has a great wrist shot…very precise and deceivingly quick release…has very good control over his backhand. Technical Ability: An average puck handler, does not excel in great puck control, who depends more on his speed…uses the stick well in defensive situations. Pass: Doesn’t pass the puck often, as he is more of a finisher than a set up player…when he does pass, his passing ability is above average. Hockey Sense: Sees the ice very well at both ends of the ice…developing into a great two way player…a natural finisher, able to be at the right place at the right moment. Defensive Play: Surprisingly responsible defensively…uses his speed effectively to get back into the defensive zone…uses his stick work effectively in the defensive zone. Physical Play: Grew an inch in the spring and summer of ’03…not a physical player, depending on his speed, but is durable and can handle pressure well in traffic…defensively delivers the pressure at the boards, showing a good level of toughness and physical play. Intangibles: Has a very good attitude and a solid work ethic…listens well to authority… effective on his own, but needs a talented center to take full advantage of his scoring ability and speed.

The review from Russian Prospects is much more detailed, and I really like the way it sounds. Lisin is probably the fastest skater on the Rangers right now, and appears to be a pure sniper. He doesn’t have the hands that would make him steal the show, and it appears he will need a playmaking center in order to make the best of his ability, but if he convert, then we will all be happy, considering the lack of converting opportunities into goals by the Rangers last season.

The trade of Korpikoski for Lisin really illustrates how this team is being built around the Tortorella model. He wants people who can skate, shoot and score, and get back on defense. If he develops the way these scouting reports say he will, then this trade will be a steal for the Rangers. I think he has the potential to put in 25-30 goals this year if he sees solid playing time on one of the top three lines. Assuming he doesn’t sign with the KHL.

On a side note, what’s with Don Maloney picking up all the Ranger prospects? Montoya, Korpikoski, Prucha, Dawes. What’s the deal?