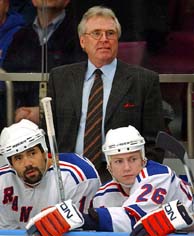 Take a good look. Tonight is probably the last time you’ll see this team as presently constructed because their next contest won’t come until after the March 4th trade deadline. With the team riding a 2-8-4 stretch that has sunk them to seventh place in the Eastern Conference, just two points out of tenth, there’s little doubt in my mind Glen Sather is going to make some kind of move soon. Is that going to be a push for a top six forward or stud defenseman, or is it going to be a selling off of older vets in exchange for younger building blocks? That might depend on what happens tonight.

The Avs have basically been in a season long funk, and have gone 6-14-0 in the last month and a half. They did just get franchise center Paul Stastny back from missing nearly two months with a broken right forearm, so that’ll be a nice shot in the arm. I dunno about you, but it just looks weird seeing Colorado in last place in the standings.

I guess Mark Bell couldn’t force his way into the lineup. Enjoy the game.