Does a Nick Robertson for Vitali Kravtsov trade make sense? 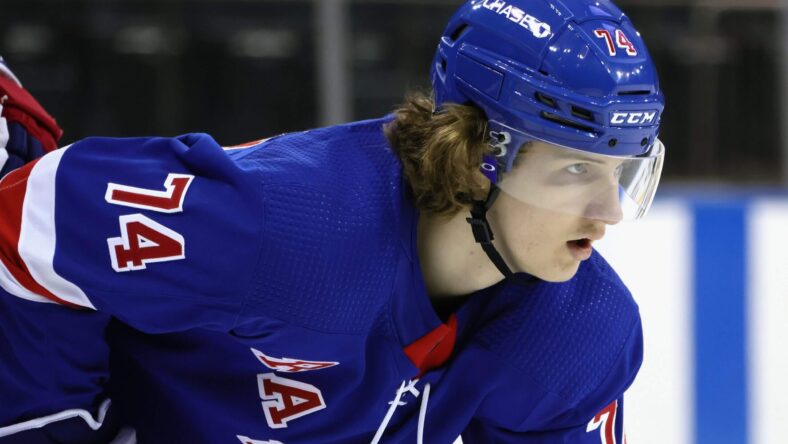 Does a Nick Robertson for Vitali Kravtsov trade make sense for the Leafs and Rangers? Rumors in Toronto are that Robertson still hasn’t solidified a spot on their roster, and it’s not even guaranteed he will. It seems to be a similar situation to the Rangers and Kravtsov, who has played well with the Rangers but has had a bumpy road to the NHL and this season. If the rumors are to be believed, then perhaps there is a match.

Let’s be very clear, it’s highly unlikely either team considers a Nick Robertson for Vitali Kravtsov trade. It’s rare teams would trade top prospects like this when they are at the cusp of being regulars in the NHL.

There is logic for both teams. For the Rangers, they need a shooter, and that’s what Robertson is. He doesn’t have the first round pedigree that Kravtsov has, but he might fit a little better into what the Rangers need now. It’s why Frank Vatrano was so effective with the Rangers. They need a pure shooter, and Robertson is that.

Accounting for what we know about Chris Drury, he definitely prefers the North American style of play. That’s no fault to Kravtsov, obviously, but he and Gerard Gallant are both on the same page, and that’s the style of play that Robertson might bring, in addition to being a shooter.

For Toronto, it does appear they don’t trust Robertson, however I am not as tuned into the Leafs as I am the Rangers. Kyle Dubas, who we know is an analytics GM, would love Kravtsov’s 55% expected-goals share. The Leafs would also benefit from Kravtsov’s willingness to go to the boards and corners while their big guys capitalize.

Both teams might benefit in terms of shaking up their lineups a bit, and perhaps finding a cheaper alternative to the traditional trade deadline rental. On the off chance this works for both teams, they may not need to go after a Patrick Kane or a Vlad Tarasenko.

Why neither team would do it

How often do teams trade their top prospects like this? I think the Jonathan Drouin/Mikhail Sergachev trade is the most recent high profile one. A Kravtsov/Robertson swap wouldn’t be at that level though.

Another thing to consider: Both Kravtsov and Robertson are at all time lows in terms of trade value, if you believe trade value fluctuates like this on a month to month basis. Robertson isn’t playing, and Kravtsov can’t stay healthy. Neither are performing to their expectations or ceiling. Would both GMs part with top prospects at their lows?

Another question: Would both GMs part with prospects at their lows within the same conference? Dubas and Drury don’t really have a history of making trades, and we know GMs love to go back to what they know.

It’s also very early in the season and in their respective careers. Perhaps this gets revisited at the trade deadline after more of an NHL sample from both players.

It’s unlikely something like this happens, since the NHL isn’t really a fun league when it comes to trades. Given where the Rangers are, they seem more likely to trade Kravtsov in a deal for a deadline add for a Cup run than for another prospect in a change of scenery trade.