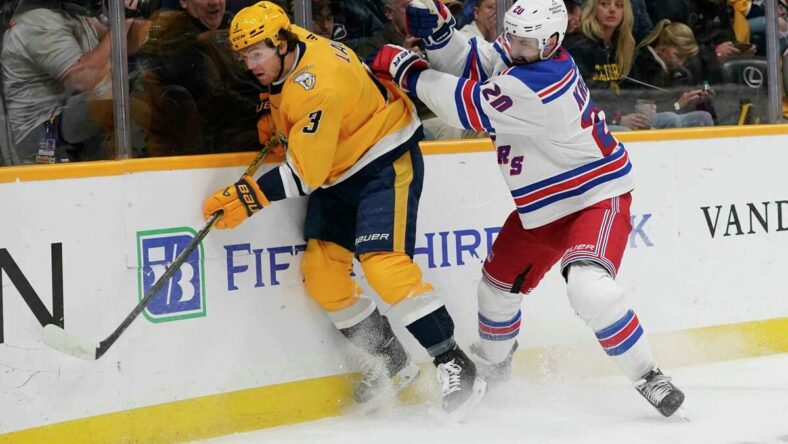 Another day, another dominant puck possession game, and another loss. Is this rock bottom? Because this feels like rock bottom. Nashville is not a particularly good team. While their strength as a franchise has always been to have tight games, the disparity in the talent on paper should have been enough for the Rangers to blow the doors off the Predators. Shots by the end of the game were a whopping 35-18 in favor of the Rangers. You outshoot your opponent almost 2 to 1, there’s no other explanation to the losses right now than just miserable puck luck.

Now that didn’t mean that during the course of the game that there were not some glaring things unfolding. For example, on Nashville’s second goal, it all happened because Trocheck did one of the laziest glass and out attempts I’ve ever seen, and the puck landed right on Roman Josi’s stick.

The Rangers can have a flurry of shots with the swings of momentum in the game, but they are also having a really bad habit of playing down to their opponent this year. Last year’s team would have probably been outshot, but would find a way to win. These Rangers are almost finding ways to lose.

As for the goaltending, if you give up 2 goals in a game, that kind of deficit is not at all insurmountable with this roster. It’s flat out embarrassing actually.

One positive to take from the night though is the great start from Filip Chytil, who has 7 points in 10 games. Last year he struggled, putting up about a goal a month pace. This year, while doing much of the same process, the puck is going in. He’s one of the few who actually is shooting to his skill level this year.

This is a combination of a bad angle and soft stick check by Alexis Lafreniere, followed by Jacob Trouba going for the hit instead of leading with his stick to poke the puck away. There was some talk about this being on Jaro Halak, but I disagree. Once Trouba has to move off his man to cover for Lafreniere, Halak has to cover the passing lane that Trouba was forced to vacate.

We don’t shy away from blaming the goalie when it’s on him, but this one isn’t on Halak.

Vincent Trocheck tried to do the glass and out clear, but failed. The turnover caught the Rangers, and it wound up in the back of their net.

After Jacob Trouba busted his butt getting back to break up an odd man rush, the Rangers were able to get the kid line out and they did what the kid line does. Filip Chytil has a very good and under appreciated skill of finding open ice in the slot. He moved very quickly back a step and to the left a step to give Adam Fox a passing lane. Fox doesn’t miss. Neither does Chytil.

That’s it. They need the win against Arizona, also on the second of a back to back.