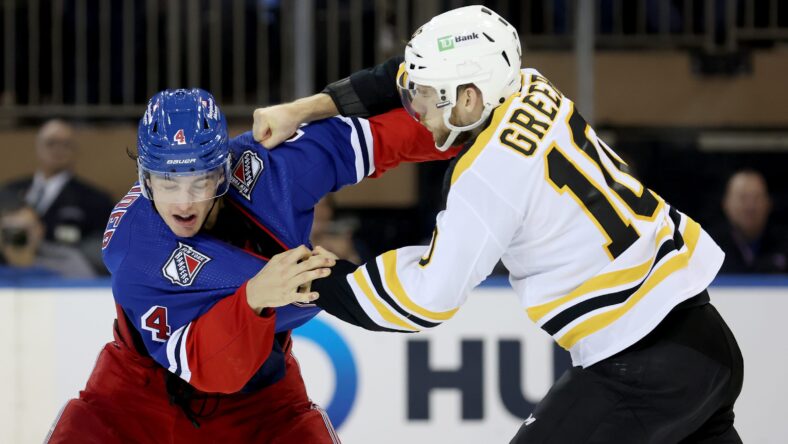 It was a long night for the Rangers. From puck drop, it was clear that this was going to be their toughest matchup to date.  The Bruins were trying to go for franchise history of 11 wins in their first 12 games of a season–which they ultimately succeeded. The Rangers don’t need to burn the tape, but chalk it up to getting beat by a hot team that forced the Rangers to play their game. Injuries didn’t help the Rangers, down two key forwards and then losing Ryan Lindgren early in the first period due to a late hit by David Pastrnak.

As the schedule turns, the Rangers are going to need a full bill of health to their lineup. They lack the horses (as most teams do) to lose 2-3 significant players to injury. Obviously as times goes on, needs will be addressed as larger samples are taken into account and this team has some rhythm.

This doesn’t absolve a slight blame though on the Rangers that they are a Jekyll and Hyde act a bit early on this year. They’ll put on monstrous, dominant performances, and then get absolutely obliterated on their home ice. The Bruins on a roll, but the Rangers appeared to lack a bit of fight. Shots ended up being 37-20 in favor of the Bruins. Just a masterclass on puck possession, getting into shooting lanes, checking your opponent, and causing turnovers with counterstrikes.

Shesterkin wants this back. It’s a bad angle backhand shot while he was on the post. Say what you want about Jimmy Vesey bouncing off David Pastrnak, this is one Shesty should stop.

The Rangers played much better in the second period. This was a bit of a dump in by Braden Schneider that slowed down after hitting Kaapo Kakko. That slowed it down just enough for Mika Zibanejad to retrieve the puck with Jimmy Vesey cutting to the net. This is just a perfect pass after the slowed dump trapped the Bruins above the play.

This was both a good play by Charlie Coyle to get free from Jacob Trouba, and a pretty bad play from Trouba to not tie him up.

What a rip by Adam Fox, who was given too much room due to the Bruins misplaying the blue line on the entry.

Trent Frederic one-timed a loose puck through two guys in front. Shesterkin was late to react, so it looks like he didn’t see it. Bad timing for Shesterkin to lose sight of a shot.

Taylor Hall forced a turnover, then the Rangers allowed a pair of cross ice passes on the rush. Shesterkin had no chance, and the Rangers did not defend that rush well.

Final thought on the evening, It’s early, and we’ve seen how the kids grow before our eyes, but I am beginning to worry about the play of Braden Schneider. It’s not that he’s been bad, but he just doesn’t seem to be doing anything. Aside from annihilating Trent Frederic with a clean open ice hit (and had to fight along with Barclay Goodrow), he wasn’t that noticeable last night or, to be fair, through most of the first month of the season.

The Rangers traded up to secure this kid in the draft, and again it’s still early and he needs time, I just hope he develops into whatever it is they saw on draft night in 2020. Right now, given the injury to Lindgren and the lack of defensive depth, it’d be great to have a Nils Lundkvist shake things up. Since Libor Hajek is the only other option, let’s hope Lindgren’s injury isn’t to bad. And let’s hope Schneider has a K’Andre Miller type development cycle this year.

With that, onto Detroit Sunday for the return of Andrew Copp to MSG!