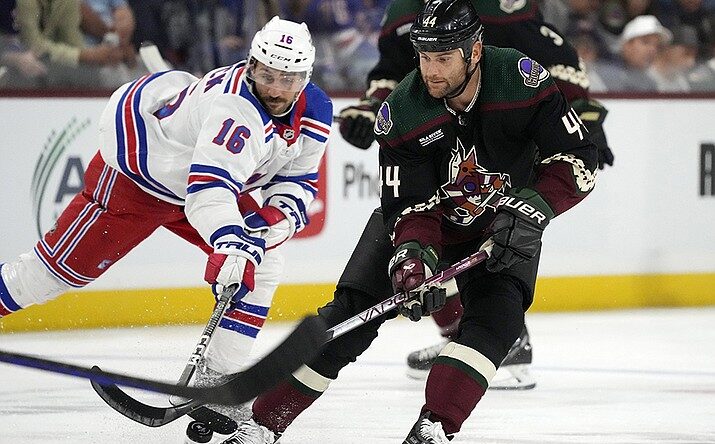 “Hartemiy” Panarin is my bit this year, but there’s no question he is the most important player on the Rangers 10 games into the season, with 16 points in 10 games ties him for 3rd place in league scoring at the time of this article. On top of it, it was his 31st birthday yesterday, so a happy birthday to everyone’s favorite bread man. He is officially back.

Despite scoring 96 points last year, he just looked “off” last year, that is no longer the case this season. He’s not only paid the most on the team, but he has been their best player by a landslide as the other aspects of the team still are figuring things out early on.

Though I would not have necessarily thrown him in the crease on a back to back so early into the season, there were definitely signs of improved play for Igor Shesterkin, who stopped 18 of 20 shots he faced. One of his best was at the end of the game in a mad scramble for the puck and he made a great athletic save going left to right to stop the Coyotes from tying it late and propel the Rangers to victory. Two points don’t always come easy, but they mean as much in October as they do in April.

The team dominated 5-on-5 possession, and shots with another 39 SOG performance. Most of those shots were fantastic looks on Coyotes goalie Connor Ingram–who himself had a great game as he battles for a job in the NHL. So it’s funny that with the improved faceoff wins, clear dominant puck-possession, great xGF numbers, that the struggle of the year has been the goalies and shooting percentages.

All great signs that when everything finally clicks, this team will be a force to be reckoned with. There are some big 2013-14 vibes from this team where they’ll struggle like we’ve seen early on, but then wait for the avalanche of goals, wins, saves, etc. that comes when we hit around Christmas.

Last thought on this game, it is absolutely hilarious and embarrassing how many fans at Arizona State University were Rangers fans. It’s no question the Rangers are a well-travelled fanbase, but of the 5,000 fan capacity arena, at least half were Ranger fans. When the Rangers would score, the building was louder than when the Coyotes would score. There’s no point in further hashing the pathetic optics of an NHL franchise having to resort to playing in a college rink.

At least the Rangers got the win and can leave that mess behind until next season. Next on the agenda: Broad Street vs Broadway.