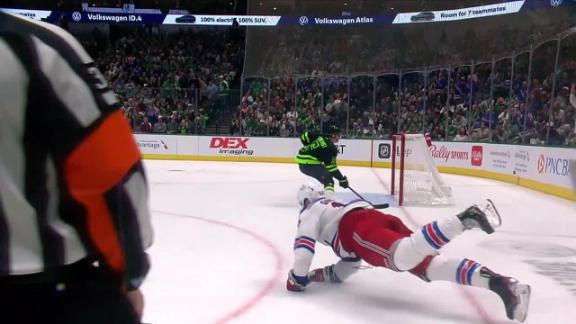 The Rangers have ended their four game losing streak with a big third period and a 6-3 win in Dallas. The Blueshirts came out sloppy against the Stars, with borderline terrible neutral zone and defensive zone play, before tightening things up about 10 minutes into the game. Still, the Stars kept things interesting until the third period, when the Rangers realized they were the better team.

The shooting slump that mired the Rangers the last two games disappeared in a big way, as the Rangers not only capitalized on their chances, but were able to generate sustained offense with high quality chances. The big difference in this win over Dallas was the puck support and movement, which had gone stale of late. All teams go through spells like this, it was just exacerbated since it was still October.

The biggest change, or return to normal, was on the powerplay. The Blueshirts capitalized twice on the powerplay, and did so by changing their look and not forcing the puck to Mika Zibanejad. Sometimes, you just need to get back to basics, and that’s what the Rangers did. Plus a little puck luck finally going their way.

Defensive zone turnovers and failed clears wind up in the back of the net regularly. The Rangers couldn’t clear, they couldn’t recover, and that left the cross ice pass to Mason Marchment open. That’s a goal 9 times out of 10 when placed right, which Marchment did.

Chris Kreider was very strong on the puck along the boards, fighting off a pair of Stars to get the puck to the point to Braden Schneider for a shot that went wide. Kaapo Kakko’s rebound shot was blocked right to Kreider with an empty net. This may be chalked up to luck, but you create your own luck.

Watch Kreider cut to the net, drawing a pair of Dallas defenders to watch him. They were late to react to puck bounce off boards to Kakko, forcing a stick in the lane instead of a body. Both Stars defenders were then focused on Kakko, instead of one sticking Kreider at the back door.

Dallas was obviously focusing on Mika Zibanejad, so the Rangers changed things up by actually moving and rotating, something they hadn’t been consistent with for a few games. Vincent Trocheck wound up in Zibanejad’s spot, with Zibanejad low threading a pass to him. Good movement and adjustments by the Rangers here after their powerplay went cold.

Roope Hintz basically did what Chris Kreider did on his goal in the first period. He got the puck from the half boards to the point, then cut to the net. He got a step on Jacob Trouba, and the initial point shot got deflected, stopped by Shesterkin, but right to Hintz for the tap in.

The powerplay is heating up, and they struck again with a pretty passing play. There was nothing the Stars could do here.

The Rangers won the faceoff, but didn’t control the puck. Jason Robertson’s shot snuck under Shesterkin’s pad, a shot he normally stops.

Vinny Trocheck and Julien Gauthier combined to keep the zone, and then feed the puck to Zac Jones at the high slot for his first NHL goal. The Stars failed to clear the zone, and it wound up in the back of their net.

On a delayed penalty, the Rangers put together this passing play. Two straight goals where you just need to watch in awe.

One thing to watch as the Rangers hopefully hit their stride with a weak schedule is Igor Shesterkin. He’s been shaky to start the season, which is fine and somewhat expected. This is when we should start to see the Shesty we expect, especially with the quality of competition he will be facing this month.

On to Arizona State University.