Heading into the season, there were a few doubts regarding Artemiy Panarin and his ability to produce at a superstar level as he entered his age-31 season. But thus far, Panarin is proving doubters wrong following a “subpar” 2021-2022 season, with a career low (full season) in goals but a career high in points courtesy of 74 assists. The points were one thing, but he seemed “off” for the year, not really driving or dominating play. That has changed this year.

Panarin is off to the best start in his career, with 4 goals and 12 points in 6 games. His 25% shooting-percentage aside, which is likely to come down closer to his 14% career average, Panarin looks different. He’s taking control of games and the offense is running through him, instead of around him. So far, he’s been the dominant force that the Rangers need him to be. 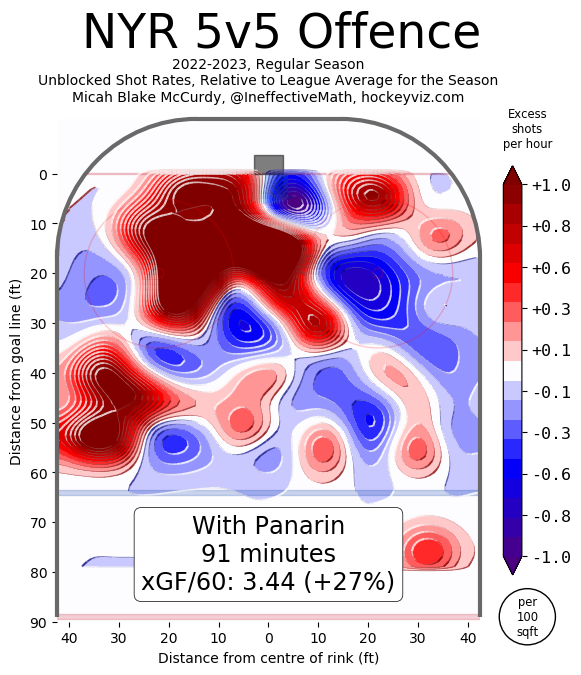 When Panarin is on the ice, the Rangers are well above league average offensively (and well below league average defensively, thus many track meets). He’s found chemistry with Vincent Trocheck and Alexis Lafreniere, with both being more engaged on offense and better complementary players to Panarin’s skill set. They defer to Panarin to drive the offense, instead of trying to get too cute with the puck.

Panarin’s play has put him in the 100 point conversation, something he has yet to accomplish in his career. Given how lethal the Rangers powerplay is, combined with a renewed vigor at even strength, Panarin has a chance to get there. He would need to average 1.16 points per game over the rest of the season to reach 100 points, certainly doable in this offense.

Filip Chytil’s injury may have ripple effects down the lineup, with perhaps more focused defensive matchups against the Rangers top six. That should hopefully be a short term problem, albeit in a difficult week for the Rangers with three of four games against tough opponents this week.

Panarin is proving doubters wrong to start this season. If it were just points with no substance –yes, that does exist– then we may not be having this conversation. After all, we’ve seen many players build up gaudy point totals as passengers in the past. After an “off” year, Panarin has regained that confidence and swagger you want to see from a superstar player, and he’s taking over games for the Rangers.