Rangers Recap: A Wild one in St. Paul 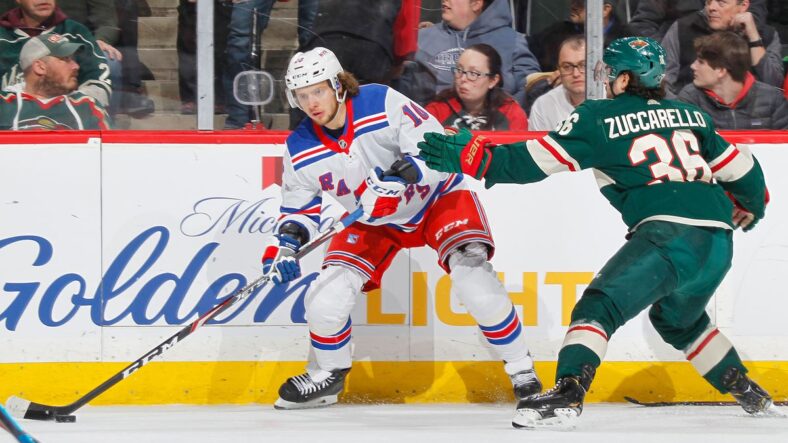 This is about as good of a start as an entire team as you could hope for the Rangers. Last couple of years, there was always a portion of the team who didn’t look ready to go, or would have to at least catch up. A few years ago it was the top six wasn’t showing up. Then it was the Covid season and Zibanejad struggling. This year though, not the case whatsoever. The entire team is rolling and the stars are being stars. Panarin with a casual four point night, Trocheck with two, including his first goal as a Ranger, Lafrenière with two gorgeous assists. Igor of course Igor’d all over the place and put up a .917 save percentage performance.

The start of this game wasn’t the prettiest for the Rangers, but a power play goal helped them take the lead while Minnesota was dictating play. It’s the second game of an 82 game season, so I’m going to take the wins as they come as every team is getting into game shape and just figuring things out again. That being said though, it’s always a good day when you can put a 7-spot past Marc Andre Fleury. That guy might be cooked. One can only hope that as a team, the Rangers can continue to put up 3, 4, 5 goals a game with the amount of talent throughout the roster.  On paper, there are few flaws on this team and it makes sense how they are getting the job done early on.

With all of the positives, a quick note on something that I’ve noticed and wondered for a long time: Why does Jacob Trouba continue to be the QB on the 2nd power play unit? Don’t get me wrong, I enjoy the player. I think he makes sense as captain judging by what the players say about him that he’s the most vocal, and the man can crush opposing players. But he just does not look comfortable out there. Even while playing with Zac Jones tonight, who is much better suited as a power play QB.

Even K’Andre Miller would be a better option at this point. You don’t need a guy who’s stationary at the blue line ripping one-timers 10 feet wide. Trouba looks very uncomfortable and like he’s forcing stuff, it’s not his natural inclination as a player. That being said though, it’s 45 seconds on a power play where the first unit is going to score 90% of the goals because they are an elite group of 5.

Vincent Trocheck is the man who drew the Wild out of their penalty kill system, aided by Frederick Gaudreau trying to make a play at the point, opening that initial passing lane from Artemiy Panarin to Mika Zibanejad. The defenseman low has to cover Zibanejad, because you have to cover Zibanejad, and because Trocheck drew the extra player to him, that left Chris Kreider open at the back door. What a passing play.

There isn’t really a breakdown by the Wild, except for maybe having two guys at each post watching Panarin. But how do you defend that passing? Adam Fox was fully covered by Jonas Brodin and he still got his stick on it.

Alexis Lafreniere is the real deal, folks. He forced a pair of turnovers on this, with the first leading to sustained zone time, and the second leading to a beautiful pass to Panarin in the slot. When you force turnovers, you force good teams like Minnesota into bad coverage, which is why Panarin was so open.

Not really a penalty killing breakdown by the Rangers here. That’s a shot you allow to happen. It’s just that Mats Zuccarello always scores on his old team. Shesterkin was slow to react from the accidental screen from Jimmy Vesey.

Just a straight forward blue collar hockey goal. No defensive issues, just the Rangers beating the Wild to the puck on the forecheck, a shot from the point, and crashing the net.

Panarin forced the turnover on the blocked shot, which led to open space as per usual. Just another perfect pass from Panarin to Vincent Trocheck. Don’t discount Lafreniere with the initial shot that was blocked, and was in on forcing the turnover.

This is the first real defensive breakdown by the Rangers for the season. A turnover, three Wild players behind the defense. That leads to goals against.

Kaapo Kakko is kind of good.

The Rangers had another poor defensive showing on this one. Matt Boldy just walked through them. Started with the Zac Jones turnover at the blue line, then lazy stick work.

A clean faceoff win, which is far different from a contested faceoff win, gave K’Andre Miller some space to make a little move in the high slot while Kreider cut to the net for the deflection.

Final note of the evening: Are the Rangers Nasty?