Is a Nils Lundkvist trade request at the heart of his trade rumors? 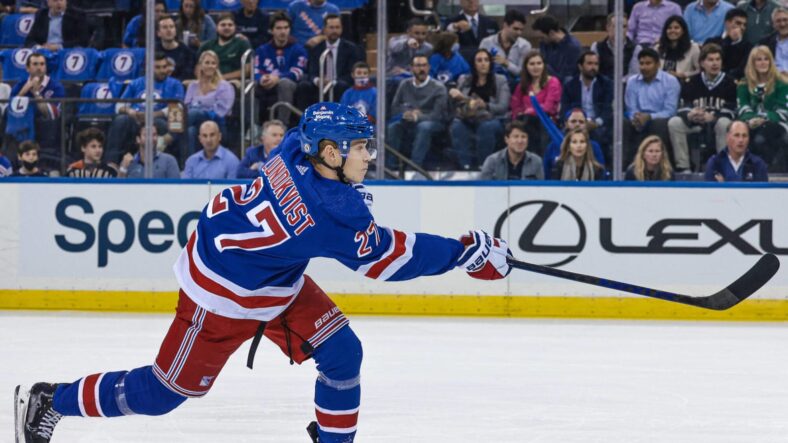 Per the NY Post, there appears to be a Nils Lundkvist trade request, and the Rangers are doing their best to move the “frustrated” defenseman. At first glance, this passes the sniff test, and now is the best time for the Rangers to trade Lundkvist if that route is to be explored. It’s not a great situation, but it is a reality we knew was coming.

There is no confirmation that a Nils Lundkvist trade request is on the table, but if you read between the lines of the NY Post article, it sounds like there is one. Phrases like “accelerated trade efforts” and “working with his agent” pop out as important pieces of this rumor.

Regardless of whether there is a Nils Lundkvist trade request on the table, moving him now makes sense. It’s clear that Lundkvist will not be given an opportunity to play to his strengths in New York, and that’s by no fault of his own. Lundkvist is best served in a situation where he can run a powerplay, and Adam Fox blocks him with the Rangers.

There’s also the potential that Lundkvist should be a top four defenseman, but he is blocked by the current Rangers top four. Even if –they won’t, at least not yet– the Rangers move on from someone in the top four to make room for Lundkvist, he still wouldn’t play on the powerplay.

It is best served for the Rangers to move Lundkvist for a team need (center) now, instead of letting his value drop.

The Post is very clear that this is not like a Vitali Kravtsov or Lias Andersson situation, where the front office was the focal point of the frustration. This is a depth chart thing, and we’ve been saying here since Braden Schneider was drafted that Lundkvist likely wouldn’t be a Ranger for long. It was obvious from the JD fist pump, and even more obvious once we saw the team Gerard Gallant and Chris Drury have been trying to build.

Lundkvist was not given a fair shake with the Rangers, I think many can agree on that. He was saddled with Patrik Nemeth for 99% of his TOI, and we all know how that went. Yet despite that, Lundkvist put up decent offensive metrics and showed that he, in a different situation, should have stayed in the NHL.

On a related note, give me all the Lundkvist-Schneider pairings this year. pic.twitter.com/gAaxlf42Tz

Lundkvist drove offensive play on a team that couldn’t do anything right except score on the powerplay and get historic goaltending from Igor Shesterkin. Timing matters of course, as Lundkvist was sent to Hartford for Schneider, who leap frogged him on the depth chart and, more specifically, in the role the Rangers want from a third pairing defenseman. Roles matter in this new regime.

These frustrations are warranted, and would be at the heart of a Nils Lundkvist trade request, if there is one. There’s also no guarantee Lundkvist gets traded before camp opens. He’d likely make a good complement to Schneider by being his Ryan Lindgren to Adam Fox. But he still wouldn’t have a legitimate spot on the powerplay as long as Fox is here. PP2 just doesn’t get the same opportunities.

The writing has been on the wall for Lundkvist for some time now. It’s a shame, since the kid will most likely develop into a steady NHL defenseman. Hopefully the Rangers get good value out of him whenever this very likely trade goes down.