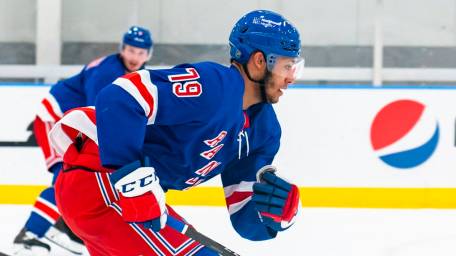 Much like with Alexis Lafreniere, there is a growing call for the Rangers to lock up K’Andre Miller long term. Locking up Lafreniere long term is difficult, as is giving Miller a long term deal. The question isn’t about if the Rangers should do it, it’s whether or not they can afford to do so.

The Rangers cap outlook for next season isn’t overly great. They currently have $18.4 million in cap space next season with needs at backup goalie, three defensemen, and at least 7 forwards. Let’s give the cap ceiling a $1 million boost, giving the Blueshirts $19.4 million to field a roster. That’s $19.4 million for a whopping 11 roster spots. All of a sudden, Locking up Miller long term isn’t as easy as once thought.

Compounding this is who the Rangers need to re-sign. Miller and Lafreniere are the big names, but don’t discount Filip Chytil, who is due for a pretty big bump if he stays with the team. There’s also Zac Jones and Vitali Kravtsov, and both are likely to double their current cap hits on bridge deals if they make the roster and contribute tertiary scoring.

Sammy Blais is likely to get re-signed, if only because there are some similarities and stubbornness on Chris Drury’s part to simply let key trade targets walk (see: Hajek, Libor). It’s a bit of a double edged sword though, as Blais re-signing means he likely didn’t produce much so the Rangers can afford him, but that salary is an overpay. If he outproduces expectations, he may not even be affordable.

To break this down even further, we can estimate certain players/position salaries:

Without factoring in Chytil or Miller, and admittedly potentially being light on Lafreniere’s next deal, the Rangers are looking at ~$12.14 million spent on the 9 players mentioned above. The only players left, of course, are Miller and Chytil.

Chytil is the wild card here, as his production will drive his next contract. He will get a qualifying offer of $2.6 million, but it’s unlikely he will sign that. The way too early contract projections have Chytil around 3 years and $4.5 million. There are many variables that could bring this number up or down, but that seems about right for a young arbitration eligible middle-six center with a higher ceiling than he’s shown.

We will get into Chytil’s future with the Rangers in a separate post, stay tuned.

But for the sake of the post, let’s use $4 million as the 3C salary. That’s $16.14 million of the $19.4 million spent before you get to potentially signing Miller long term. Miller isn’t signing a long term deal at $3.3 million. The again way too early projections have a Miller long term extension in the $5 million range over 6 years.

Unless there’s a bigger boost in the cap ceiling, the Rangers are at least $2 million short. And this isn’t accounting for being light on Lafreniere’s next deal, which may come in significantly higher than $3 million.

Locking up Miller long term seems like a no brainer

Cap aside, locking up Miller long term seems like it should be a no brainer for the Rangers. If they can afford it, they should and likely will do it. If you look at past RFA history under Glen Sather and Jeff Gorton, they don’t lock up RFA forwards long term after their ELC expires. They do, however, look to lock up RFA defensemen under the same circumstances. Adam Fox, Brady Skjei, Marc Staal, Dan Girardi, and Ryan Lindgren all got more than the standard 2 year bridge deal after their ELCs expired.

Miller is in this group and if the Rangers stay true to form, they will look to lock up Miller long term. After a shaky start to last season, Miller evolved into possibly the best Rangers defenseman post trade deadline and in the playoffs. He has certainly eclipsed Lindgren as the best LD on the roster, even if he doesn’t necessarily play 1LD minutes yet. Rob Luker has a lot to say about that.

If the goal is to lock up Miller long term, and if the cap ceiling doesn’t have a surprising increase, then the Rangers need to make a tough choice. It looks like Chytil may be the odd man out, but removing Blais from the equation gets the Rangers to the $5 million estimate needed for Miller.

It’s a long season and you never know what happens, and all of these estimates may change. The preference is that the Rangers lock up both Lafreniere and Miller long term. That seems unrealistic, and given prior history, it’s expected Miller gets the long term deal first.

Or we could see both go the Henrik Lundqvist route and take a 1 year contract for 2023-2024 with the wink-wink, nudge-nudge agreement that a longer term contract when the cap ceiling is projected to increase more in the summer of 2024. It would certainly be more creative than the boring NHL contracts and lack of action we normally see.