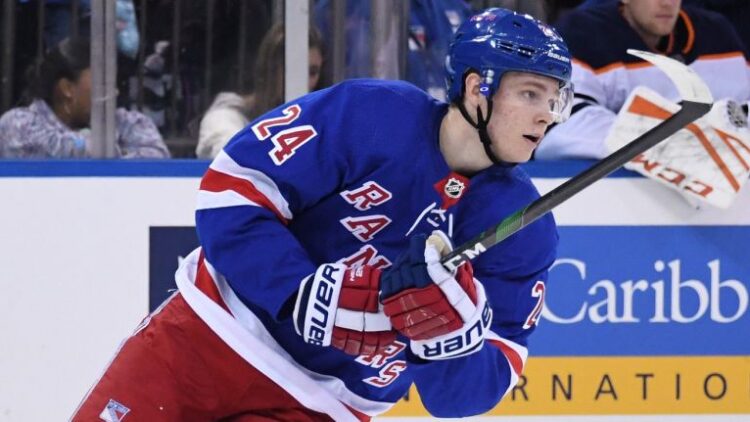 The 2022 NHL Draft is fast approaching this week, as is NHL free agency next week. With that comes roster moves, and the Rangers are certainly doing their due diligence on basically every top six center on the market. They’ve been linked to Nazem Kadri, Sean Monahan, Pierre-Luc Dubois, Mark Schiefele, and of course Ryan Strome and Andrew Copp. Free agents appear to be too expensive, so trades may be the best bet. But in doing so, Filip Chytil and Kaapo Kakko are their best trade chips. But what does trading Kakko or Chytil mean to the Rangers, present and future?

1. It’s very obvious that Chytil and Kakko are the two best chips the Rangers have. They are young, talented, relatively cheap, and have high potential. Rebuilding or retooling teams looking for a quick transition to younger players covet these types of players in trades. The prevailing theory is that the Rangers will need to move one or both of Kakko and Chytil to make a major upgrade at center. Regardless of your personal feeling about the duo, they have significant trade value.

2. But just because they are their best chips, with Nils Lundkvist, it doesn’t mean the Rangers are itching to move them. Chris Drury has the benefit of the doubt again, given his masterclass at the trade deadline, and you’d like to assume he doesn’t just give away one or both of his under-23 players here. There are significant risks with trading them.

Chytil has finally shown what he can do when given actual NHL talent on his line, as we saw in the playoffs. He’s not going to be a Mika Zibanejad, but he’s going to be a play driving, likely 50 point center at his best. Those aren’t easy to come by.

As for Kakko, we’ve seen flashes of why he was the #2 overall pick, and he’s certainly getting his confidence back.

This is the kind of thing that Kakko brings. Puck control behind the net and commanding space. Chytil found the open lane and set himself up to shoot. Neither does it consistently yet, but at their peak, this is what you would expect.

3. The concern with trading Chytil is that the Rangers are going to be moving on from a talented player who is cheap, and may be able to provide that 2C production that they are going to bring in. Remember, Chytil is a good two-way player who has consistently driven play despite varying qualities of linemates. 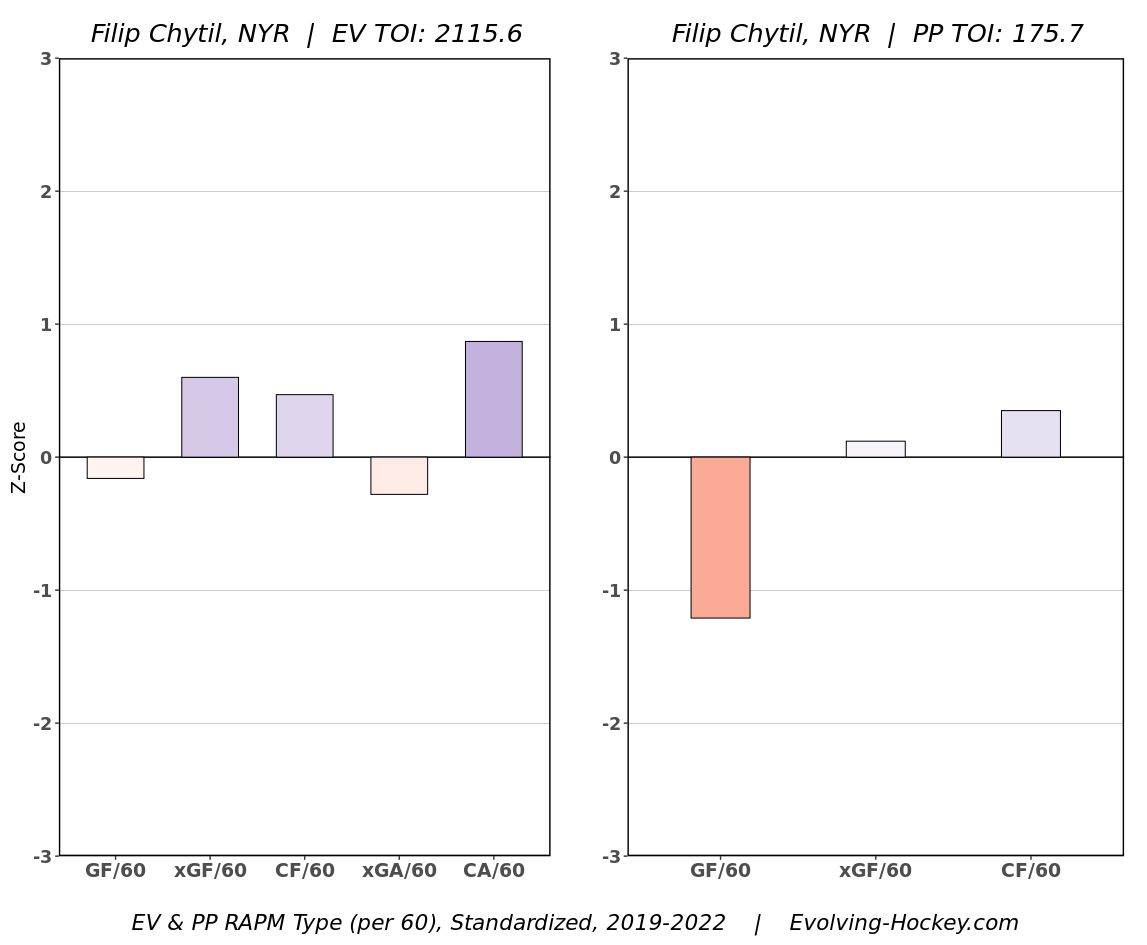 One RAPM chart doesn’t tell a story, but it certainly fills in some gaps. Chytil has had some miserable on-ice shooting luck, driven mostly by lack of quality linemates. It wasn’t until this year that he got real time with Alexis Lafreniere and Kaapo Kakko, to great results.

His next most common linemate over the past three seasons? Julien Gauthier. Not exactly known for his ability to score, and you know Chytil has left assists on the table because of poor shooting linemates.

Something else to consider: Chytil has played more than 2000 minutes at even strength over the last three seasons. Laf and Kakko are the only two linemates he has over 600 minutes with. Gauthier is 370 minutes. Everyone else, and there are a lot of them, is under 300 minutes. The kid hasn’t had consistency nor talent on his line.

4. That said, if you can trade Chytil for a young center who may be slightly more expensive but it already established, you have to do it. In the PLD situation, Chytil shouldn’t be the guy that makes you say no. It does, however, open up a hole at 3C.

Given the 3C options in free agency, there’s a strong argument for upgrading from Chytil to solidify the top six, and then figuring out 3C either through free agency or the trade deadline.

More food for thought: If the trade cost gets too high, you can always just see how Chytil looks as the 2C with Artemiy Panarin for 50 games, and then address that position, if needed, at the trade deadline.

5. As for trading Kakko, he’s a bit trickier. There are injury concerns, and they’ve certainly hampered his ability to put together a productive season. The skill and potential are clearly there. But there are certainly concerns about sustainability, and whether or not he has quick enough awareness to read and make plays before he gets smothered by opposing defensive schemes.

This is a concern for all young players, of course, and it is an area where Kakko has already shown improvements. Back in February 2020, Conall noted how Kakko receives the puck too close to his body, thus taking away valuable seconds when making the next read and play. It was a product of playing on a larger ice surface. At that time, he didn’t receive pucks with outstretched arms, ready to make the next play. He received the puck in tight, and that extra second to make the transition hurt him.

He’s adjusted marvelously there, and it’s helped his ability to generate offense. It’s not consistent, but the worry is that it will become consistent and, if trading Kakko becomes a reality, they may regret it.

Depth down the middle wins, so you’re hoping in this situation that the strong centers carry the wings. Also in this scenario, Kravtsov remains with the Rangers. You can’t deal both Kakko and Kravtsov. It’s one or the other, or you keep both.

7. The one benefit of trading Kakko or Chytil is that you do alleviate some of the cap concerns for 2023-2024, in a way. Kakko and Chytil are players that are due raises this offseason and next, respectively. Their costs are uncertain as of the writing of this post. Acquiring a center with term makes that cost a certainty, and provides clarity beyond this season.

The caveat, of course, is the cap hit of the player acquired.

8. This is over 1,000 words to say something simple. Trading Kakko or Chytil should not be the scenario that breaks a deal for a real upgrade. But they should give you pause to make sure you’re getting the true need. Trading one of them will be a difficult pill to swallow for many, but it may be needed to make a run.

The key here is getting the right deal if one of this duo is involved. The goal is to both win now and set the Rangers up for the transition to the next core, most likely beginning after the 2023-2024 season. A 30 year old 2C doesn’t do that. But a 24 year old does. That’s why a guy like Dubois or even Schiefele makes sense.

It’s been a while since the Rangers traded away a truly talented youngster for an established  player. It doesn’t mean they won’t again, and it doesn’t mean that trading Kakko or Chytil will be a home run. Drury will need to tread carefully.