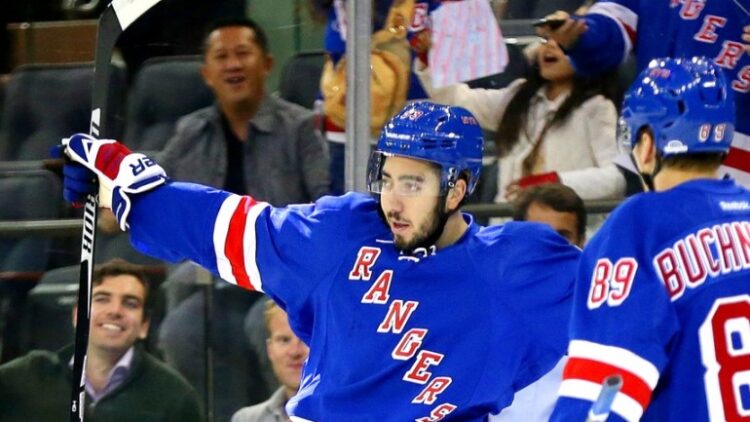 The Rangers went into the season with a bit of a question mark at 1C, not that Mika Zibanejad was bad or wasn’t cemented at 1C, but the struggles in the shortened 2021 season were fresh in everyone’s mind, as Zibanejad was simply not himself for most of the season. He put most of that to rest this season with 81 points in 81 games played, setting career highs in points and assists (52), like Artemiy Panarin. 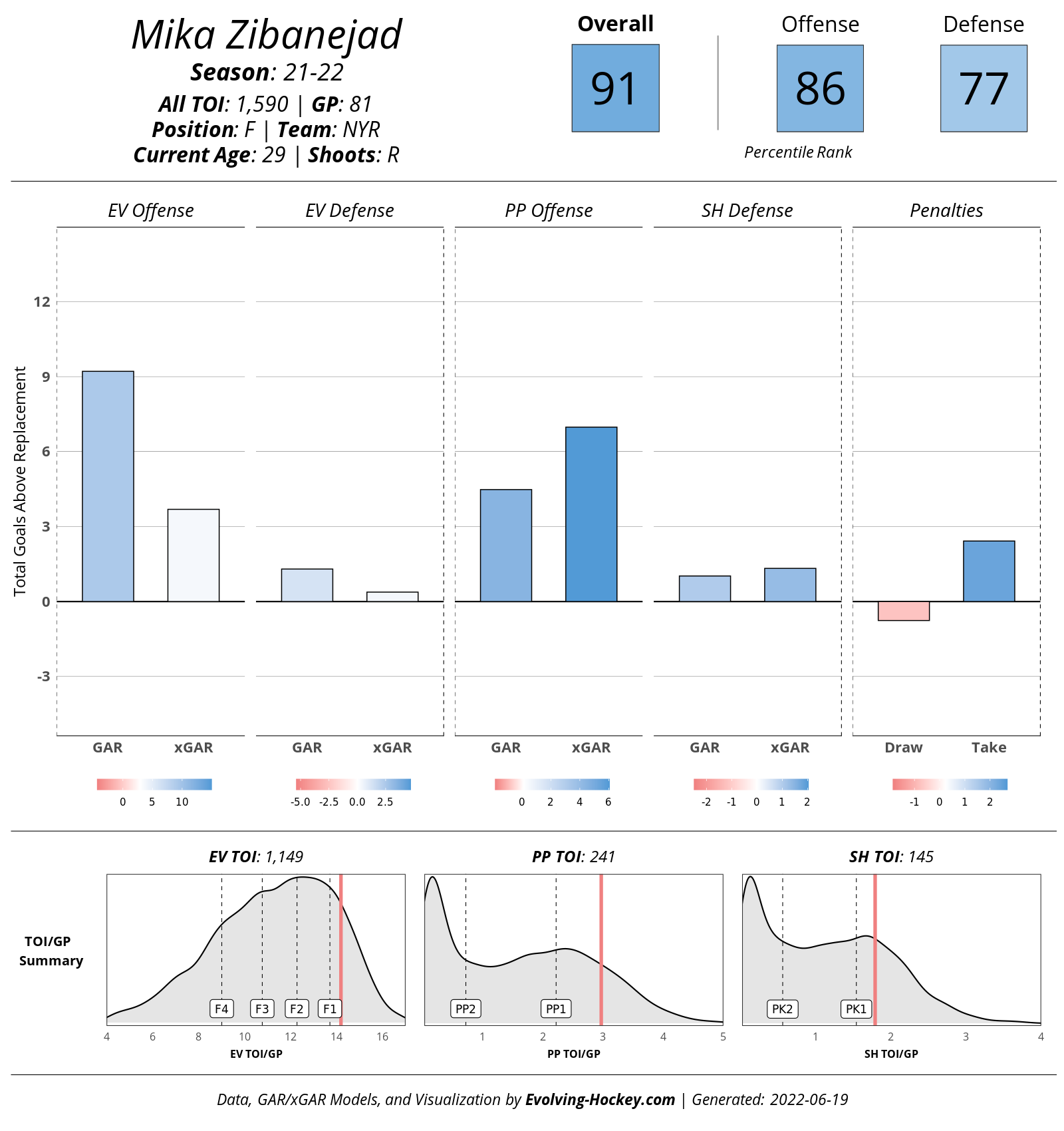 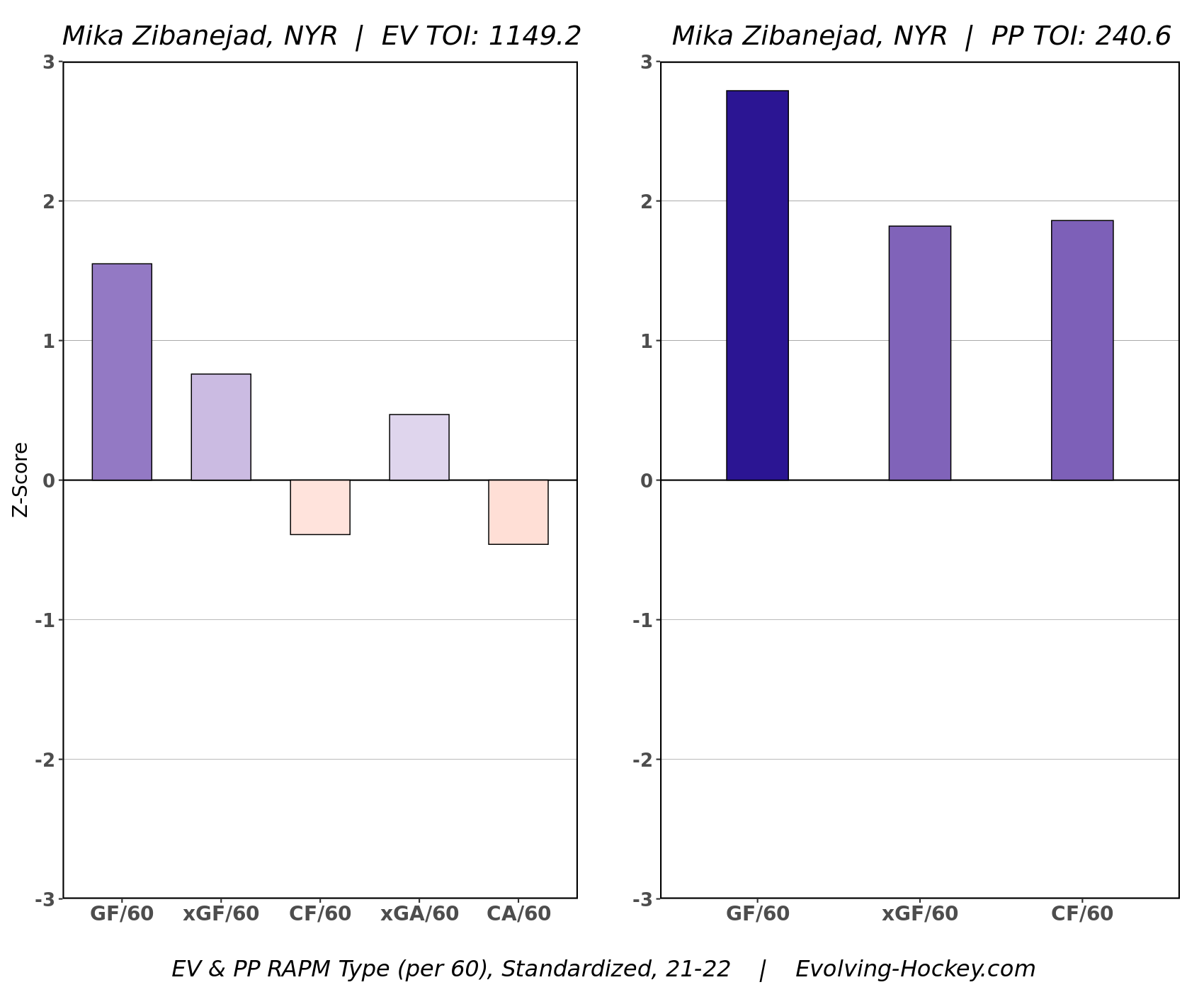 At even strength, Zibanejad was one of the best two-way players on the roster. From Evolving-Hockey, we can see what whatever concerns we had about Zibanejad driving play, mostly from the 2021 season, were proven wrong this season. Some will look at this and say that Zibanejad outscored his play, signaling a drop in points next season, but it doesn’t tell the whole story. Zibanejad may not be an elite play driver, but he’s an elite finisher.

There’s a reason why Zibanejad is leaned upon at all strengths. He’s just a great two way, heady hockey player. He was also the guy that carried the Rangers in the comeback against the Penguins, with 3 goals and 4 assists in Games 6 and 7. He then put up 4 goals and 4 assists in Game 3-7 against Carolina to complete that series comeback. Even against Tampa, he put up 3-2-5 before Anthony Cirelli’s line completely shut him down.

There will be many discussions about Zibanejad’s new contract and if he will be worth it towards the tail end of the deal. But for now, he’s worth every penny, driving play, getting in on the forecheck, and playing solid two way hockey. He proved himself a leader on and off the ice, and while we joke about the vibes/60 on the team, it’s so important to have that kind of leadership and pure joy on the ice to go with the production.

Things should continue next year as well, since Alexis Lafreniere appears to be the front runner to replace Frank Vatrano on the RW with Kreider and Zibanejad. That line could be something special.