The Center of it all 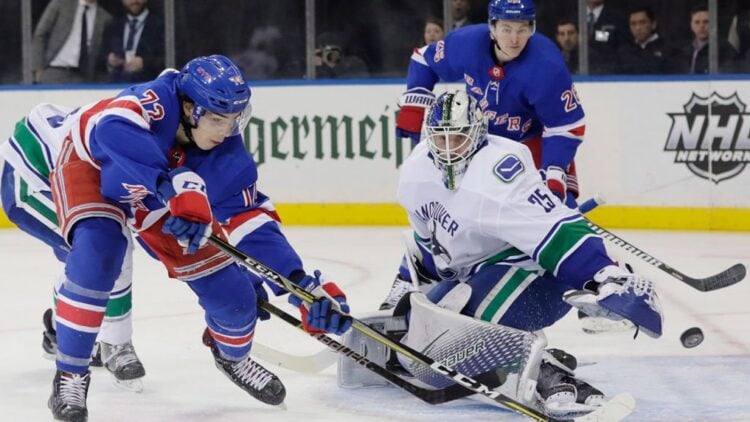 The New York Rangers just had one of their most successful seasons in franchise history. They had over a hundred points and made the final four in the first season where the rebuild truly began to bear fruit. The young kids began to step up and support the veterans and it was truly a season to remember. Sounds like everything’s all good for next season right?

Well it’s not that simple. The Rangers center position needs to be addressed behind Mika Zibanejad. That’s arguably the most important task for Chris Drury this summer.

How does the Rangers center position get addressed?

So what’s the move for Drury this summer to address the Rangers center position? It’s not like elite centers are always available and easy to find, it’s probably one of the hardest positions to efficiently fill along with a top pair defenseman. Is the Rangers answer in house already? Do they need to make a trade? A signing?

Currently, the depth at the Rangers center position is good but I wouldn’t say it’s elite. After Zibanejad, it’s Ryan Strome, Filip Chytil, Andrew Copp (who plays wing mostly), Kevin Rooney and on occasion Barclay Goodrow. Strome, Copp and Rooney are all unrestricted free agents, Chytil is still on a cheap deal and Goodrow is still signed for five more seasons. That means possibly three of these guys won’t be here next year. The question for Drury is: Who of those three should be re-signed and who should be allowed to walk? Seems like it should be a tough decision for the Rangers GM but honestly, only one of these three has a shot at staying.

Ryan Strome should not be re-signed and should be allowed to walk and test the free agent market. Earlier in the season I was actually on the side of re-signing Strome if he could be had at a deal for around $5 million, but times change. Strome is possibly one of the least clutch players I’ve ever seen, and not to dump on the guy more, and not saying he’s the sole reason for the loss, but imagine if he simply stops at the far post in Game 6.

Regardless of that one play, the fact is Strome just is not an elite player. He isn’t among the upper echelon of centers in the NHL and he’s a glass cannon. When he isn’t scoring, he is a detriment to the team as he isn’t that great defensively. He also isn’t as versatile as someone like Copp who can easily shift around the three forward positions. Add in that Strome is rumored to get $7 million and he has priced himself out of New York. I can definitely see a team like Seattle paying Strome his desired money and to that I say: Goodbye and thanks for everything.

Copp is a bit different of a story for the Rangers center position. He was basically a point per game player after the trade deadline and meshed with the lineup really well. He found some good chemistry with Artemiy Panarin and Strome and had some big moments in both the regular season and playoffs. Drury is at least going to consider bringing Copp back if the rumored ask is around $5-$5.5 million per year.

Copp is already very close with Rangers defenseman Jacob Trouba and fellow UFA winger Frank Vatrano. He should be at the top of the list for Drury if he wants to go the re-sign route and not look elsewhere. He fits the profile of this squad.

Kevin Rooney, unless he takes an extremely cheap deal, will most likely walk into free agency. The Rangers recently signed 27-year-old Gustav Rydahl, a Swedish center from Farjestad BK of the SHL, and it looks like he might just be the fourth line center next year. Rooney was a solid role player while he was here but again, if he wants to chase the bag he won’t get it here.

Looking outside the organization to address the Rangers center position gets much more interesting. The top UFA center targets are currently Evgeni Malkin, Claude Giroux, Patrice Bergeron, Nazem Kadri, and Vincent Trocheck. Malkin will most likely return to the Penguins, and if he doesn’t the Rangers won’t be able to meet the contract ask.

Giroux turned the Rangers trade offer down so I doubt he circles back to New York.

If Bergeron doesn’t go back to the Bruins, retirement is most likely in the cards. He’s been a warrior his whole career and he’s earned his rest.

Vincent Trocheck would be an interesting choice, but Carolina will likely want to retain their second line center. Carolina also has a history of not exactly wanting to break the bank on players so maybe Trocheck could be had at the right price.

It seems like addressing the Rangers center position via free agency may not be in the cards due solely to budget. But if you scroll down the list every so slightly, you’ll notice a name that has been linked to the Rangers by fans for years now: Paul Stastny.

Stastny is a natural center who has had pretty good underlying numbers and knows how to chip in offensively. He is a bit on the older side, 36, but a one of two year deal (Evolving Hockey has him at 1-2 years around $3.5 million) wouldn’t block any of the kids from taking major roles in the lineup. Is he a big flashy name? No. But he’s someone who would be a good experienced center and wouldn’t break the bank.

There is one more way the Rangers center depth can be strengthened, and that’s making a trade. There are quite a few centers out there who I think would make interesting targets for New York. The top of the trade list for me is Seattle Kraken center Yanni Gourde. He has a cap hit of $5.16 million which is less than what it would take to pay Strome and possibly Copp.

If the Rangers opt to go this route, it would reunite Gourde with his former Lightning linemate Barclay Goodrow. That line was incremental in the Lightning winning two straight Cups. This would also signal that Drury is ready to see what Chytil can do at the second line center, as Gourde would definitely be a third line center for the Rangers. He would be manageable under the cap and he’s the perfect type of center the Rangers could use in the playoffs. The concern is the multiple years left on his current deal, and that he will be 33 when his deal is at its end. There are ways to make it work.

Turcotte was a highly regarded prospect coming out of the 2019 draft. He was projected to be a possible elite number one center but based on his development path, he may top out as more of a middle six center. If the Rangers don’t think Nils Lundkvist has a big future here, and the emergence of Braden Schneider has made some think that, there might be a trade to be made here.

Would Lundkivst for Turcotte benefit both squads? It’s an interesting scenario and Drury might want to save his prime blue chip prospect in Lundkvist for a bigger trade. Could a package around Matthew Robertson or Vitali Kravtsov get it done? That would be something I would explore as Chris Drury. Turcotte would would every chance to succeed here in New York and unlike Lundkvist and Robertson, his path to the NHL isn’t blocked and a center spot would be his for the taking if he earned it in camp.

One final trade scenario would be the head back to Winnipeg once again since they are considering retooling and, I want to stress this is not something that has even been rumored, try to see if they can pry Pierre-Luc Dubois or Mark Scheifele away. A move of his magnitude most likely means a trade involving a piece you don’t want to part with, though.

If Drury does something like this it shows he thinks the club is just one move away from getting to the mountaintop. The Rangers center position would be much improved and it would be fun to see all the skill on display in New York. A top six including Zibanejad, Panarin, Scheifele/Dubois, Lafreniere and Kreider would be tough to beat in the Eastern Conference.

But the question is: Who would go in a trade like that? This is one scenario, like Dave mentioned, where Kaapo Kakko could be traded. Again, this is all conjecture. Nothing like this has been rumored. Scheifele is signed for one more season at a $6.125 million and Dubois is an RFA this summer. Drury would have to play some cap gymnastics for either of these to work.

The cap is always looming and any financial decisions Drury makes this summer regarding the Rangers center position are going to have repercussions for years. The cap crunch is mostly for 2023, when they have Lafrenire, Miller, and Chytil due new contracts. The COVID pandemic really screwed up annual salary cap and the flat cap has not been kind to the Rangers.

This will continue to be a huge obstacle as this team tries to bring the first cup back to New York since 1994. Strome, Copp, Trocheck, Gourde, Turcotte, Dubois and Scheifele are just some of the options Drury will have this summer in his quest to strengthen the Rangers down the middle; it’s going to be a very interesting offseason on 33rd and 7th.