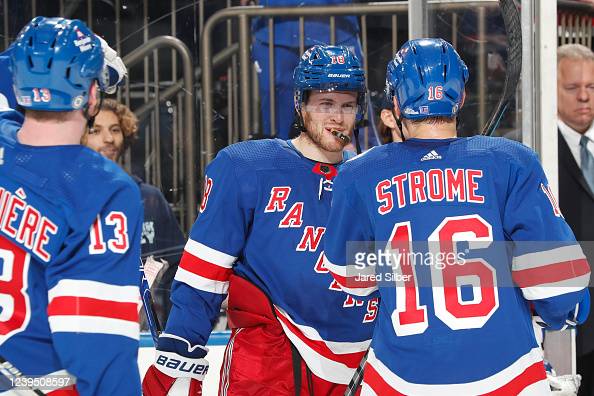 NEW YORK, NY – MARCH 25: Andrew Copp #18 and Ryan Strome #16 of the New York Rangers celebrate after a 5-1 win against the Pittsburgh Penguins at Madison Square Garden on March 25, 2022 in New York City. (Photo by Jared Silber/NHLI via Getty Images)

The Rangers free agents projected contracts are going to present some difficult decisions for Chris Drury this offseason. The Rangers have four RFAs and seven UFAs at the NHL level to manage this summer, and while not all will be re-signed, some will need to be fit into the limited cap space for next season and beyond.

The projected cap hits come from Evolving-Hockey, which has about an 80% hit rate on their projections. They present different probabilities and cap hits for all contract durations. For the sake of this discussion, we are going to focus on the most likely contract to be signed. That doesn’t mean it is going to happen, but it’s a good baseline to use.

The Rangers have four restricted free agents, of which two are expected to be a part of the team next season. As an aside, I do not include Libor Hajek as part of this discussion anymore, as he has clearly been passed on the depth charts.

Georgiev is going to get traded, so we can cross him off the list immediately. Gauthier is, if anything, a 13/14F at this point. He does a lot of things well, but his lack of scoring touch is going to leave him on the outside looking in.

Kakko’s projection is the big one. The Rangers would likely be better off trying to get him on a longer term deal, but it’s unlikely to happen. Kakko himself likely wants to kick his first big contract down the road a bit so that he can show he belongs in the top six, thus getting more money down the line. The Rangers likely won’t offer a long term deal due to lack of production (currently) and injury history.

While this may open Kakko up to an offer sheet, I can’t imagine this actually coming to fruition.

Sammy Blais’ contract projection might be a surprise, given his $1.5 million qualifying offer. However he did not play all season, and that hurts a lot. For what it’s worth, Evolving-Hockey has a two year deal at $1 million as a decent probability of occurring.

Assuming no offer sheets, neither Blais nor Kakko break the bank short term.

Let’s start with the easy one: Braun isn’t getting re-signed at that amount. He’d be a great fit as a 7D, but the Rangers need to find money, and Braun is a few hundred thousand over the preferred cap hit for a 7D.

Ryan Strome is where things get interesting quickly. His 7 year deal is a no-go for the Rangers, as expected. If he is to be re-signed, it makes a lot of sense to tie him to the end of Artemiy Panarin’s contract, which is up in 4 years. Still, $6.7 million for Strome seems heavy, especially when Copp can be had for $1 million less. Strome would need to take a discount for him to work over Copp.

Copp seems to be the preferred guy here, as he not only has that chemistry with Panarin at even strength, he’d replace Strome on the PK. There’s a strong chance some team throws 7 years at Copp –projected at 22% likelihood with a $6.42 million cap hit– in which case the Rangers are likely to walk.

Vatrano at that price tag is a luxury, especially if Kakko and Alexis Lafreniere are supposed to be in the top six. There’s a path for Vatrano to stay, but he will likely get a bag from a team in desperate need of a shooter.

Motte at four years is gone. Motte at one year, at that cap hit, is a fine bargain. Worth noting that he turned down $2 million from Vancouver, which prompted his trade. Motte is a great bottom six player, but the goal is to find bargains for the fourth line, especially with the cap crunch coming for 2023-2024. Motte at $2.9 million is, like Vatrano, a luxury the Rangers cannot afford.

Kevin Rooney seems to be the best bargain for the Rangers at under $1 million as a potential shutdown 4C or 13F, but roster construction may mean Rooney is on his way out. Ditto McKegg, who would only be useful as a 15F.

Nothing is done in a vacuum, and one decision has a waterfall effect on all other decisions. It does seem that a priority to get Kakko under contract is the first order of business, given some of the risk. But that is relatively small potatoes.

The difficult decisions with the Rangers free agents projected contracts lies with Strome and Copp. The Rangers are only going to keep one at most. But in addition to contract asks, the fit on the roster is another big question. Is it worth keeping Strome if he’s going to block Lafreniere from PP1 time? The same questions should be posed for Copp as well, however he is currently not blocking any PP1 time.

The roster fit question applies to Vatrano as well. In the hypothetical situation where he takes less to stay, where does he play? Lafreniere, Kakko, and Kravtsov –who appears to have mended the relationship with Drury– seem pegged for the 1-2-3 RW spots, with Blais taking that 4RW spot. Where’s the fit?

The first step is figuring out the true roster needs. 2C is definitely one of those needs, which is where that difficult decision between Copp, Strome, or elsewhere comes into play. The fourth line definitely needs a role, and that decision may not come until the Rangers decide what the third line’s role is.

This is a key offseason for Drury, as the difficult decisions with the Rangers free agents projected contracts will impact his plans heavily. There’s always the wild card of all the trade chips in the AHL that seemingly don’t have a roster spot, and may never have a roster spot. Can the Rangers save cap space there? It would certainly help.

The first shoe to drop will likely be the Copp/Strome decision. After that, it’s a free for all.