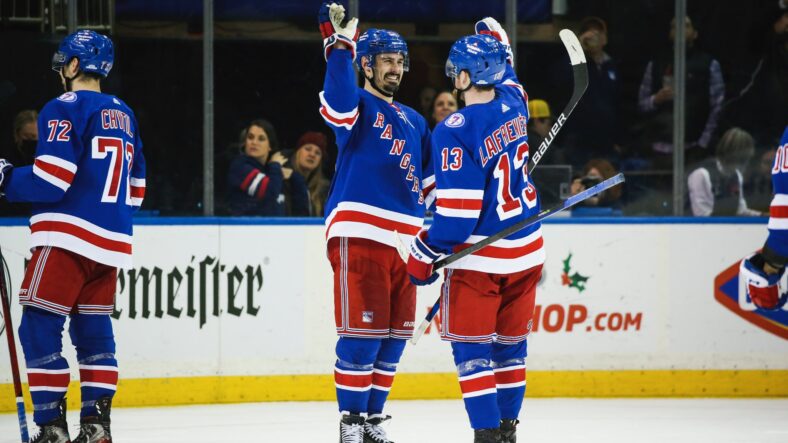 The Rangers lost in the Eastern Conference Final in six games, and much of the focus is on losing four in a row after holding a 2-0 series lead and a 2-0 lead in Game 3. But the Rangers were beat by a better team. The Rangers may have had a better record, but Tampa had the better overall playoff team. Regardless, there should be a lot of positivity surrounding this team. The NY Rangers vibes are still immaculate, and this is a team that is poised to continue their success.

If there’s one thing we can take, it’s that the Rangers clearly identified the holes they need to fix this offseason. And the best part is that these are holes that are relatively easy to fill.

The Blueshirts need a fourth line that has a role. As much as we enjoyed Tyler Motte and Ryan Reaves, they did not have a role. They weren’t a shutdown line, as no Rangers line was used as a shutdown line. They also weren’t a scoring line, providing just one empty net goal in the entire playoffs.

The fourth line is an easy fix. The Rangers seem to have realized that Barclay Goodrow is best served as their 4C as a shutdown player. He plays up in the lineup, but that’s only if there are injuries or a poorly formed roster. The best Rangers roster has him on the fourth line. He’s expensive, and that’s not ideal, but we saw what his presence did for the NY Rangers vibes.

This won’t be a popular opinion, but the fact that Gerard Gallant hid Goodrow’s return from the team shows how much he means to the locker room. He’s not going anywhere, and his role as a shutdown center will be established next season.

As an aside, for those who are worried the Rangers are going to do something monumentally stupid this offseason, I wouldn’t worry too much. They don’t have the cap space to do something that dumb without dumping a big contract. It’s not impossible, but highly unlikely.

A resounding success of a season

If I told you in October that the Rangers would lose in Game 6 of the Eastern Conference Final, you would have laughed in my face. We knew the team was likely bound for the playoffs, but to win two rounds in Year 1 of their contention window? It’s an amazing success story that the Rangers won two playoff series.

The core of the team will likely be back next season as well. Their top talent isn’t going anywhere. Their kids, including Kaapo Kakko*, likely aren’t going anywhere. They will likely be elevated to middle or top of the roster spots to replace departing free agents. That leaves bottom of the roster, role playing guys to fill out the team. These guys are easy to find, and Chris Drury has shown he knows who to target based off his trade deadline success.

*-We will get to the Kakko scratch after we hear from Gallant during breakup day. He didn’t address it during or after Game 6, and rightfully so. Not addressing it on breakup day is something entirely different.

One last point on Kakko: Teams don’t make decisions on players based off one healthy scratch. Kakko may be upset, and rightfully so, but you’d assume coach, player, and potentially GM work it out. It was one game.

As mentioned above, these guys aren’t going anywhere. The guys leaving are either the deadline rentals, who cost minimal assets, or the ones we knew were leaving anyway, like Ryan Strome. The core of the skill and the core of the youth isn’t going anywhere. This was invaluable experience, knowing how to lose, but also knowing what it takes to win.