Rangers kid line needs to play more; but where should the minutes come from? 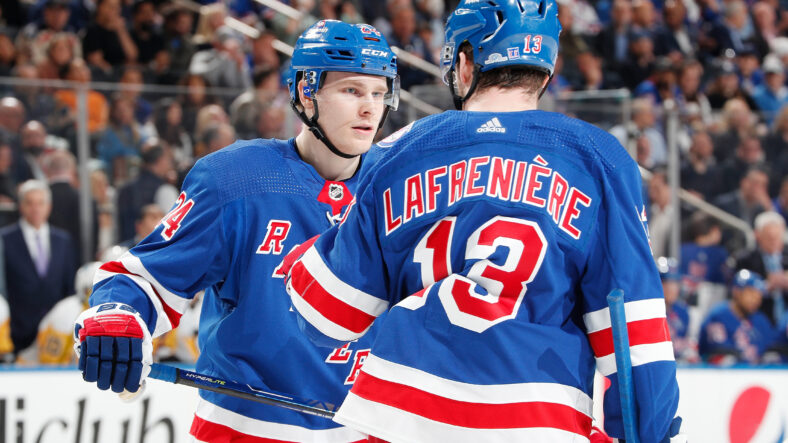 NEW YORK, NEW YORK – MAY 05: Kaapo Kakko #24 and Alexis Lafrenière #13 of the New York Rangers talk during the game against the Pittsburgh Penguins in Game Two of the First Round of the 2022 Stanley Cup Playoffs at Madison Square Garden on May 05, 2022 in New York City. (Photo by Jared Silber/NHLI via Getty Images)

The Rangers kid line of Filip Chytil centering Kaapo Kakko and Alexis Lafreniere has been the consensus best line at even strength for the Rangers. They are the only line that consistently cycles and generates offense that is more than one-and-done. There are very real calls for them to receive more ice time, but where would those minutes come from?

Through the five games of the Eastern Conference Final, the Rangers kid line has received about 11 minutes of ice time at all strengths, per Natural Stat Trick.

A couple points: Game 3 is skewed because that’s when the Rangers lost Ryan Strome, which significantly increased Chytil’s time. Game 4 Chytil was hurt, thus his low ice time. But the general ice time for the Rangers kid line is 11 minutes per game, with the overwhelming majority of it coming at even strength.

The Rangers top powerplay unit will dominate the powerplay time, as expected. The second powerplay unit doesn’t include Kaapo Kakko, which explains why his ice time is lower than Lafreniere and Chytil. So for all intents and purposes, the kid line gets their ice time at even strength, with maybe a shift or two on the powerplay.

Where should the increased ice time come from?

For a fully healthy Rangers team, divvying up ice time is a tricky thing. The third line right now gets the third most ice time, ahead of the fourth line, on average. They are 7th (Lafreniere), 8th (Chytil), and 10th (Kakko) in ice time among forwards. Barclay Goodrow is 9th in ice time at even strength, but he’s bounced to the second line here and there. That’s expected.

Perhaps, given the relative poor offensive generation from the top two lines, you can give the Rangers kid line 1 additional offensive zone start from the top six in addition to the 1-2 starts from the fourth line. It’s not a perfect science by any means, but it would at least be an attempt to get them more ice time.

It’s not as simple as “play them more”

Even as we break down where the Rangers kid line can get more ice time, it’s not that simple. Obviously faceoff location matters, but that only accounts for a percentage of shifts. Most shifts are on the fly and part of a regular rotation. A stoppage in the offensive zone at the end of a kid line shift doesn’t mean the kid line should stay out there. A defensive zone faceoff when the top six and fourth lines have just finished their shifts doesn’t mean the kid line should avoid it.

Even aside from on the fly shifts and line rotation, there are matchups to consider. Gerard Gallant prefers to get the third line out there against weaker competition, with good reason. We get into muddier waters trying to find ice time for the kids when we factor in matchups, both at home and on the road though.

The easy answer to all of this is to take ice time from the fourth line, which can be as simple as changing the line rotation, which Gallant does run pretty evenly at even strength. Perhaps that’s all the Rangers need to do.