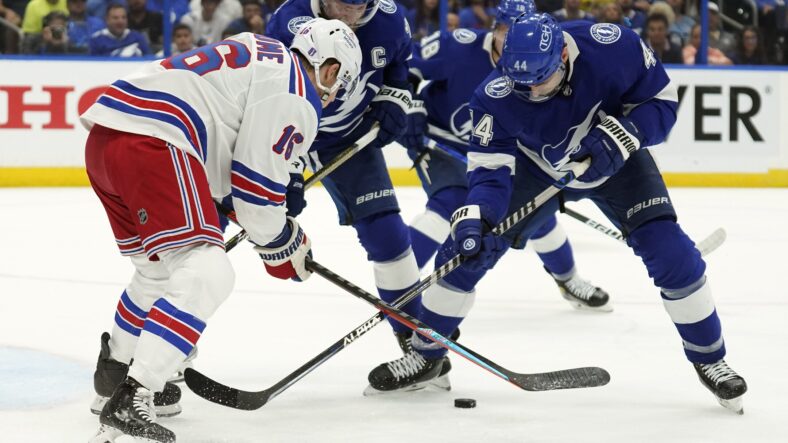 Well, you can’t win them all, and the Rangers were certainly thunderstruck in Game 3. That loss was tough with the last minute goal. Plenty of blame to go around in this one, lots of bad officiating (Thanks Kelly Sutherland), a lack of defensive prowess and awareness when the puck was on the stick of forwards and they just had to chip it out to change, and a lack of 5 on 5 scoring. After going up 2-0, to lose 3-2 and get the Lightning some life is tough. These momentum swings are very real in the playoffs. Hopefully come Tuesday, the Rangers are going to not only win the game, but not imitate the mistakes they did today to lose the lead.

Now despite the loss there was one ultimate positive, and that is Igor Shesterkin. It took the Lightning 51 shots to get 3 goals on some pretty high danger looks. While this is a bad recipe for long term success, I suspect that next game the Rangers will tighten it up a bit, let Igor see more shots from the low percentage areas, and chip in more at five on five themselves.

The forwards did not test Vasilevskiy as well as they did in the two games at Madison Square Garden. “Only” amassing 30 shots is normally okay, but when your opponent drops over 50 it’s just not good enough from a defensive standpoint. The back to back champs were never going to get swept as much as we wanted them to, and you hope this isn’t some turning point. The Rangers answered a lot of questions throughout these playoffs on the status of players and how they’ve fit as a group and I think we are gonna be in for another hell of a hockey game on Tuesday.

Corey Perry made contact with Igor Shesterkin, getting his stick across the mask. The powerplay got Mika Zibanejad a pair of looks, the first he flubbed. But the second was a rocket to the corner. You would say over the blocker, but Vasilevskiy wasn’t even there yet.

Another running of the goalie, and another powerplay goal for the Rangers. Zibanejad got another prime chance that Vasilevskiy stopped, but Chris Kreider was there for the rebound.

Just as the ESPN broadcast was fawning over Steven Stamkos’ one-timers, Stamkos gets one. Barclay Goodrow was shadowing Stamkos, but was one step too far away, which allowed the cross ice pass from Perry.

The Rangers were very sloppy in the third, and it bit them in the ass. They were just trying to survive to OT, but running around in the defensive zone led to Ondrej Palat getting that golden chance and converting.

Last thought, it’s a small thing, but on the questions, one of them was who is emerging as some of the leaders of this group. One instance that really showed not only maturity, but just using your words at the right time to uplift your teammate was Chris Kreider in the post game.

A reporter asked Mika about Palat getting the puck and Chris not only took the question, but blamed himself for puck watching. It might be a stupid little thing, but I find that stuff interesting all the same for how tight knit this squad is both on and off the ice.

Adam Fox did a similar thing when asked about officiating and Jacob Trouba who took 3 penalties today. Fox just gassed his teammate up and talked about moving on. That’s what so different about these teams than the previous runs of the 2010’s; not only a willingness to take blame and the spotlight off of the teammate, but also in the same breath talk them up and re-instill some confidence. Turn the page, let’s get the split, and win this at home in game 5!