3 Rangers takeaways from the win over Carolina 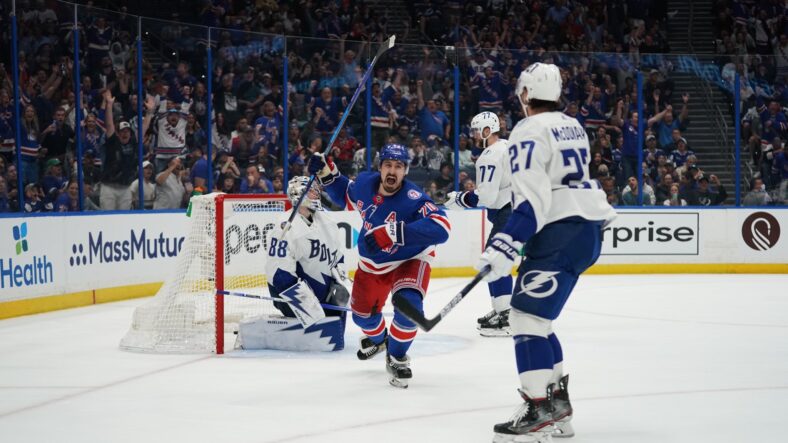 Another Game 7 win, and the Rangers are off to the Eastern Conference Final against the Tampa Bay Lightning. The two-time defending Stanly Cup champs are going to be a difficult out. They have elite goaltending, skill and depth up front, and a solid defense group. They also have one of the best head coaches in the game in Jon Cooper. But that doesn’t mean the Rangers are a pushover, and there are 3 Rangers takeaways from the Carolina series that bode well against Tampa.

1. The Rangers are battle tested

One of the storylines heading into the playoffs was the Rangers are young, inexperienced, and not battle tested. This was something that would eventually derail them in the playoffs. It almost did, as the Rangers were steamrolled by Pittsburgh in three of the first four games.

But then they came back and won in seven games.

This almost reared its ugly head head again, as the Rangers lost a heartbreaker in Game 1 before getting crushed by Carolina in Game 2.

But then they came back and won in seven games.

Now the Rangers face the Lightning, a team that just had to turnover a good portion of their roster. They are battle tested for sure, but the Rangers now have two Game Seven’s under their belt.

The Rangers also weathered the storm with significant injuries to depth players. The turning point for the Rangers against Pittsburgh was when Ryan Lindgren returned. They got a huge boost when Tyler Motte returned as well. Now the fourth line is essentially complete with Barclay Goodrow’s return.

The Rangers learned on the fly. They dealt with injuries on the fly. This is a team that is never out of it, and has rolled with the punches. What else do you want from a battle tested team?

2. They have tertiary scoring depth, and that matters

The Carolina Hurricanes had to shut down Artemiy Panarin, Chris Kreider, and Mika Zibanejad. Or at least do their best to limit them at even strength. To their credit, they did a wonderful job. The powerplay was a different story, but at evens, the Canes did a good job limiting the Rangers top six.

But that left the kid line to clean up the scraps. Kaapo Kakko, Alexis Lafreniere, and most notably Filip Chytil feasted on the surprisingly weaker Carolina depth. This line brought back memories of Pouliot-Brassard-Zuccarello, just dominating in the offensive zone and getting a bunch of chances.

The top-six will get their chances, and they will get their points. But it’s the depth that wins championships, and the Rangers finally have that third scoring line they so desperately needed. The kid line picked up the slack when the top guys couldn’t get things going at even strength. Even if they are good for just 3-4 goals in the series, that’s enough when the powerplay fires on all cylinders.

3. Shot quality against trumps all

The Rangers are getting “crushed” in the expected-goals share on the public models. Given how they are calculated, this checks out. No team is perfect, and the Rangers have had their fair share of clunkers, allowing many high danger scoring chances. But when they are at their best, and they were last night, they are limiting high quality chances against.

No team is going to have a game with zero high danger chances against. Even against the worst teams, you’re going to give up a good opportunity. The key for the Rangers, which has been a theme across most of their wins, is limiting their opposition to the outside and the low danger shots. They look dominant when they do, and look like an ECHL team when they don’t.

Tampa, like Carolina, has high end talent and scoring depth to make the Rangers pay if they deviate from their plan. If the formula is to play like they did in Game 6 and 7, then they need to ensure they do the same against Tampa.

Remember, the Rangers just need to be good enough. They don’t need to be perfect by any means. Good enough will win games when you have Shesterkin, an elite powerplay, and high end skill/depth.