Lifeless Rangers put on the brink in Game 5 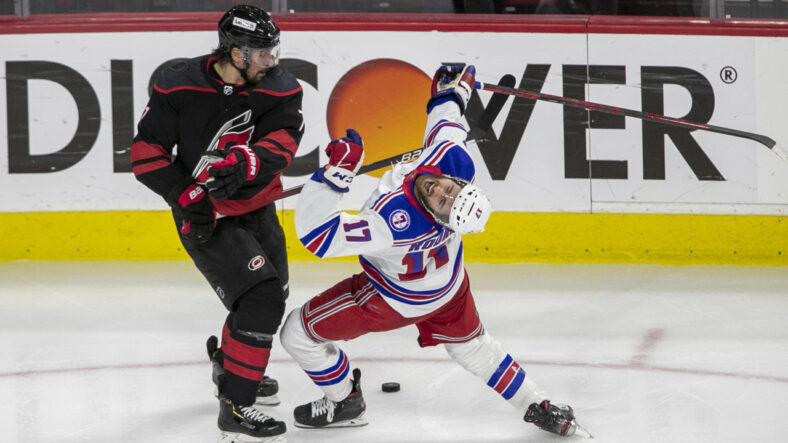 Carolina Hurricanesí Brendan Smith (7) checks New York Rangersí Kevin Rooney (17) during the second period on Thursday, May 26, 2022 during game five of the Stanley Cup second round at PNC Arena in Raleigh, N.C.

The Rangers could do no good in Game 5, and looked lost and gassed against the Canes. The lifeless Rangers got one goal by Mika Zibanejad on the powerplay, but relied way too heavily on stretch passes and fancy plays that have barely clicked all postseason. If you refuse to do the dirty work in the postseason, you aren’t going to win. That’s how it goes.

The turning point in this game was Ryan Strome’s overturned goal. The Canes scored relatively quickly after that, and the Rangers were packing their bags after they were down a goal. That is usually unlike this team, and lifeless Rangers isn’t a term we’ve used too much this season. But that’s what they were. Lifeless. This was a sorry excuse for a playoff game from a team that was building solid momentum after two strong wins at MSG.

Jacob Trouba turnover at the blue line on the powerplay, and the rest went as you’d think it would. Bad turnover.

Big timing on this goal after a second dumb Carolina penalty. This time, they convert off the faceoff win and getting the puck to Mika Zibanejad off the faceoff. Raanta didn’t stand a chance.

After the Rangers had a goal rightly disallowed for offside and a Frank Vatrano penalty, the Canes got a quick one on the powerplay. This was just a good passing play and a good read by Teuvo Teravainen to find the open ice for Seth Jarvis to get him the puck.

Just lifeless hockey for a while by this point. Andrei Svechnikov beat Adam Fox on what should have been an easy retrieval, but got the breakaway and the dagger.

The Rangers need to be able to win in Carolina in order to advance, but that is a long ways away now. The lifeless Rangers first need to find a pulse and win Game 6. This series has been night and day depending on the arena the games are played in. Perhaps that bodes well for Game 6, but not for Game 7. The stars need to show up, again. And the Rangers need to come back, again.