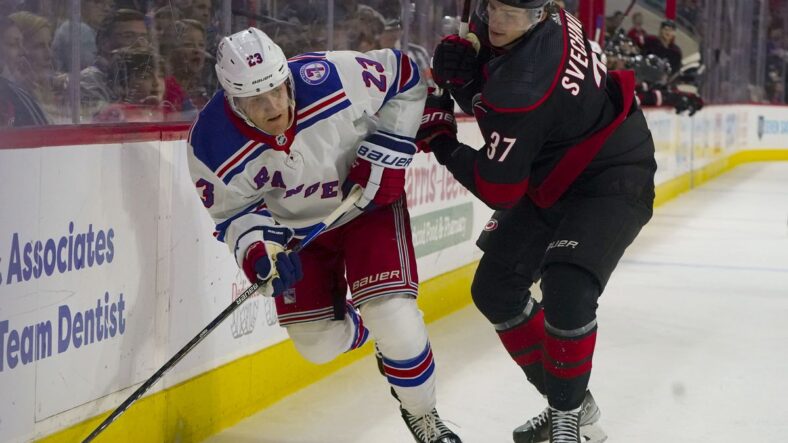 The Rangers came out firing on all cylinders in Carolina, getting great scoring chances and keeping the Canes on their heels. But it wasn’t enough, as Carolina stormed back with a dominating second half of the game, especially in the third period, to tie it late and then win it early in the first overtime.

Filip Chytil opened the scoring in the first period off a turnover and a 3-on-1. Alexis Lafreniere made a beautiful head fake, drawing both Jaccob Slavin and Antti Raanta to him before threading the needle to Chytil, who buried it. The Rangers held that lead despite Carolina having big surges throughout the game, hitting two posts until the tying goal from Sebastian Aho.

The goal from Aho came with 2:23 remaining in the third, but it seemed like a matter of time. Ian Cole ended it 7 minutes into overtime in a stretch where the Rangers managed just 1 shot attempt. The Canes are a run and gun, man-to-man team, and the Rangers simply couldn’t keep up.

The Rangers played well, but it is difficult to contain the Canes like that for an entire game, and even more difficult to win when scoring just one goal. It wasn’t for lack of chances, just some bad puck luck and one poor defensive breakdown, and the Rangers were on the wrong side of the puck luck.

Despite the loss, this was a positive sign for the Rangers. They played well and skated with a team that is much better than the Penguins. They didn’t have their pre-deadline form show up. They were simply beat by a good team. There are lessons learned, for sure. The big one is that the Canes are beatable, and are not the big juggernaut that we all may have thought.

The Rangers can win this series. It will take near perfection, but the book may be out on the Canes. Let’s see what adjustments Gerard Gallant makes in Game 2.