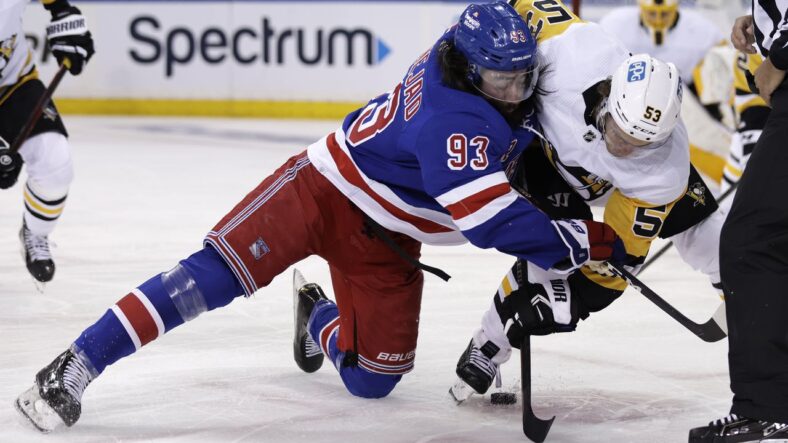 The Rangers live to fight another day. It was looking grim early on with very little life in the Rangers, and going down 1-0 pretty early. The team rallied though, got Pittsburgh off of their game, rode the momentum wave that teams tend to do in the playoffs, and walked away with a possibility to further extend this series beyond Friday.

Ryan Lindgren may very well be at 40-50%, but it was nice to see him back in the lineup playing his tail off every shift. Though Gerard Gallant dressed 11 forwards and 7 defenseman, he opted to not give Patrik Nemeth a second of ice time as the 7th defender–even when Lindgren had to miss some time as he got banged up after a play.

The kids are absolutely leading the way in this playoff. If the word “bust” is ever used in context of Kakko and Lafrenière as players, you are talking to a ninny. They have been electric this playoff playing with Chytil–who himself scored the game winning goal on the power play. Chytil: A man of his word after saying the Rangers need to shoot more.

Let’s also talk about the way the kids absolutely frustrated the Penguins after they lost Sidney Crosby to an undisclosed injury. If they continue this, we may very well see something being built here. Legends are born in the playoffs. Who is going to step up?

Despite letting in 3 goals on 32 shots, I felt Shesterkin at times looked a little shaky during the game. Particularly, I felt he was during the first period. He seemed to be slow to react to some shots, losing track of the puck, etc. However, he gathered himself and had a hell of a game from the 2nd period on.  If the Rangers are going to have a shot going forward, you will need Shesterkin to be 100% as well as the rest of the team in front of him playing well. You win on the road in Pittsburgh, oh man.

The Rangers have had no answer for this line all series. Shesterkin looked slow to track this puck behind the net to get back to his post.

No backcheck. Bad pinch by Fox, who if it weren’t for Nemeth, would be the worst Rangers defenseman this series.

Three players in front of Louis Domingue, and Fox put one over his shoulder after finding some space to work to the top of the circle.

Alexis Lafreniere found a soft spot in front of the net between two Penguins, a rare miscue this series by the Pens, and Kaapo Kakko found him with a nice pass. This has been the Rangers best line all series.

What an individual effort by Jacob Trouba here.

Igor Shesterkin with the rare turnover. The Rangers were scrambling to recover, and Guentzel found a seam for the Malkin pass.

This was a broken play as the Rangers were denied the entry, but it wound up on Filip Chytil’s stick, and he beat Domingue.

One final thought for the night: What has happened to Mika Zibanejad and Chris Kreider this series? They had a hell of a game early on in the series, but are both borderline unplayable at times now. Granted the Rangers have some decent depth to suffice, but you would like two players who are both here for a long time to be consistent contributors. Mika being the 1C and Kreider being a 50 goal scorer in the regular season. Show your worth as a leader to your teammates as well as the fans who have cheered for you throughout the regular season. They both hopefully show up in Game 6.